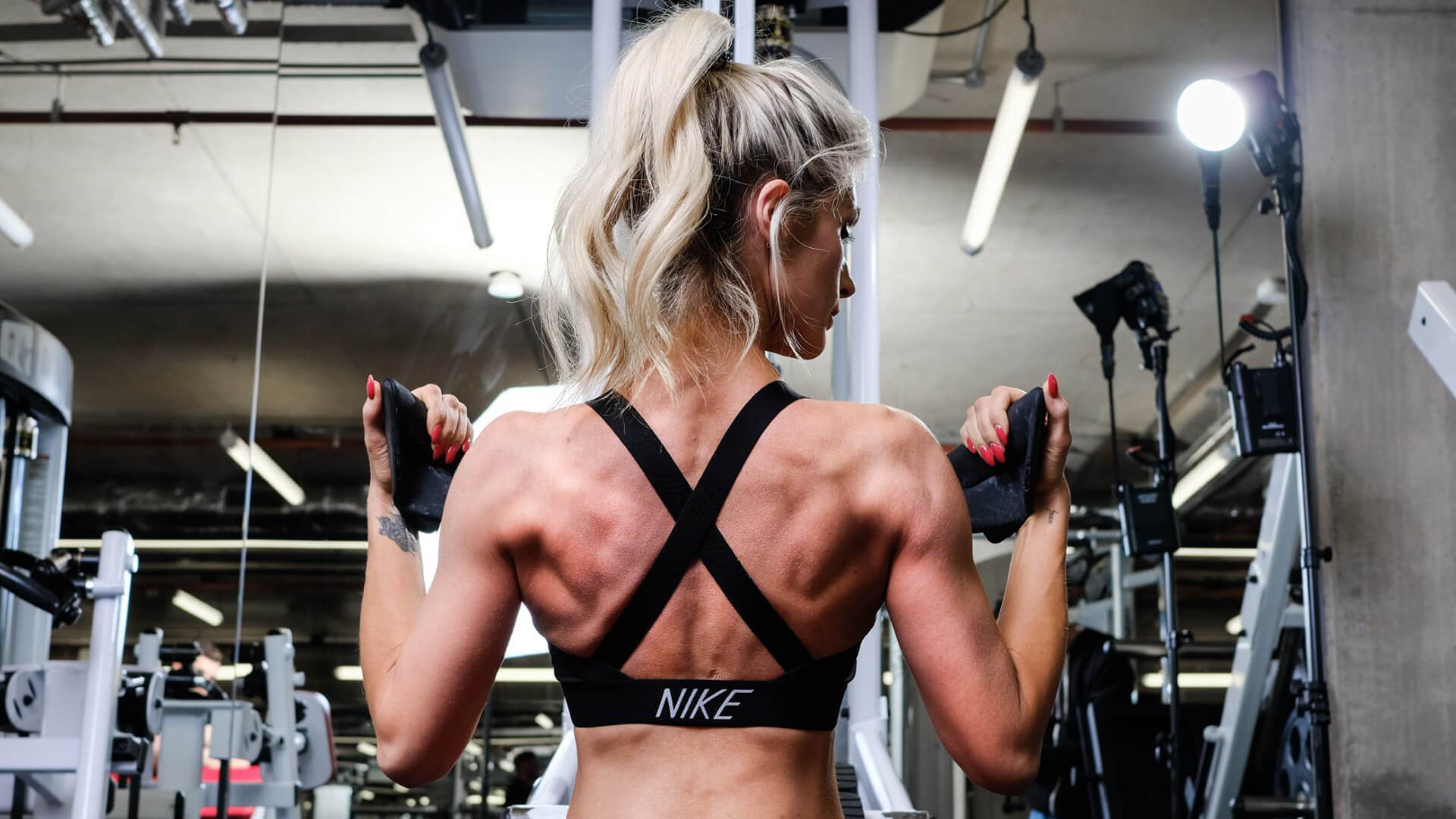 There is no better feeling than feeling strong.

That’s why I love weight training.

Doing this training program has made me fall back in love with lifting weights.

I’ve got to the point where I’m enjoying it so much and feeling so strong, that I want to do more.

I’m looking forward to every session and seeing how far I can push myself.

Since I started my 12-week journey, the weights I have been lifting have been increasing. You can see the progress before your eyes.

Yes, I’m getting stronger, but it’s more the fact that I’m feeling stronger.

The weights we’ve increased to now are certainly not easy – they never will be – but it’s almost effortless.

It’s also nice when you’re training and you can see your muscle definition – you feel like superwoman!

This makes you want to train more. You’ve got that definition, and you want to keep it and increase it.

I’ve really become addicted to it, if I’m honest.

Last week we said we’d work on more definition in the arms and abs before the end of the 12 weeks.

My body transformation has been very simple…

What has surprised me most about the whole program is that it’s been so straightforward and simple. It’s not been complicated.

The training isn’t easy in effort, but it’s easy in that we’ve just been doing simple stuff, well.

You always see people doing these really complicated workouts and things where you think ‘oh my god, I wouldn’t even know where to start with that exercise.’

People are getting the technique wrong because they’re trying something that’s way too advanced or technical.

Everything that we have been doing has been simple but effective.

We have changed a couple of exercises in the last eight or nine weeks.

It’s so simple, but it’s obviously so effective; you don’t really need to do anything else.

Getting results with U.P. is all about doing the basics, doing them to perfection, and then doing it all consistently.

It’s the whole package; being consistent, doing the exercises right, getting your food right and getting your sessions in.

It’s a really simple recipe – that’s what has really surprised me the most.

Before starting this program, even with my training knowledge, I’d go and train myself, and I’d always throw in something different with my arms or on my legs at each session.

But it makes it more complicated, and you have to think more when you get to the gym.

By following this really simple formula and making your gym sessions really easy, you don’t have to think – you just get in and do what you do – and I’ve seen the best results I’ve ever had.

The training program is not half as scary or as complicated as what people might expect – and it really doesn’t take long either to start seeing the changes to your body.

I speak to people who are going to the gym six days a week, or who are doing a class in the morning and then doing weights at night.

But now I think ‘you’re running yourself into the ground; you’ve been doing it for how long and not seeing the results you want to see.’

Now I know you don’t need to do this. There’s an easier way.

Loads of people are asking what I’m doing and I tell them about my strength and cardio sessions. Then they ask what I’m eating.

I feel like I’ve toned up and I know I’ve lost weight, because my clothes are looser.

People are looking for the secret thing you’re doing that makes it all work.

What has made it work for me and kept me going is sticking to it 90% of the time, because I’ve factored in the odd night out, meal out, and bits of chocolate (and, yes, pizza!).

If it had been ‘12 weeks where you have to stick to this, and you can’t have one glass of alcohol and no chocolate’, I know I would have struggled.

I would have cracked and then thought ‘I’ve ruined it all by having that one treat or cheat.’

But because I’ve had those allowances and not beaten myself up about it, it has worked, and I’ve still seen results every week.

I’ve had the weekly measurements, and I’ve still seen my progress week-to-week even when I’ve had an off day or an off meal.

If you’re really consistent the rest of the time and stick to things 100%, then those little things don’t matter and don’t make a difference. That’s the thing which has made this whole process achievable.

It’s certainly made the whole experience very normal and very enjoyable and makes you think that this can now be a way of life.

My cravings have gone….

One thing that is really surprising is that I’ve not craved alcohol at all.

Yes, I’ve looked forward to it when I knew I was going to have a glass of wine when going out for the evening.

But I’ve never thought ‘oh my god the one thing I want is a glass of wine.’

Weirdly, it has been the opposite. When I have had a few drinks and felt rough the next day, I’ve not enjoyed it at all.

I bought a bikini for our ‘mini-moon’ after the wedding and tried it on and showed Jon and I feel really comfortable and confident.

It’s not a nice feeling that groggy, hungover feeling when you’re not on your A game.

I thought I’d struggle not having that glass of wine with dinner or a couple of drinks at the weekend, but I haven’t.

But this makes it really realistic for carrying on with this after I’ve finished, where you can have those nights where you let your hair down, and you enjoy a cheat meal or something quite indulgent that you’re craving, like pizza!

The way that you feel from training, and the results you see physically and mentally, far outweigh eating rubbish food all the time, which makes you feel sluggish, lethargic and low on energy.

When you get into the pattern of living healthily, and you’re feeling great, and you can see all the pros and cons of doing both, that’s the thing that makes you think ‘I want to stick with this.’

Why would you want to go back when you’re feeling so good?

I feel like I’ve toned up and I know I’ve lost weight, because my clothes are looser.

I bought a bikini for our ‘mini-moon’ after the wedding and tried it on and showed Jon and I feel really comfortable and confident.

I love it, and I feel like me again. That was a really nice moment!

It’s not until you see the progress pictures that you realise how toned up you’ve gotten and how your body shape has changed and the definition you have gained!

That’s why I really want to keep this going!