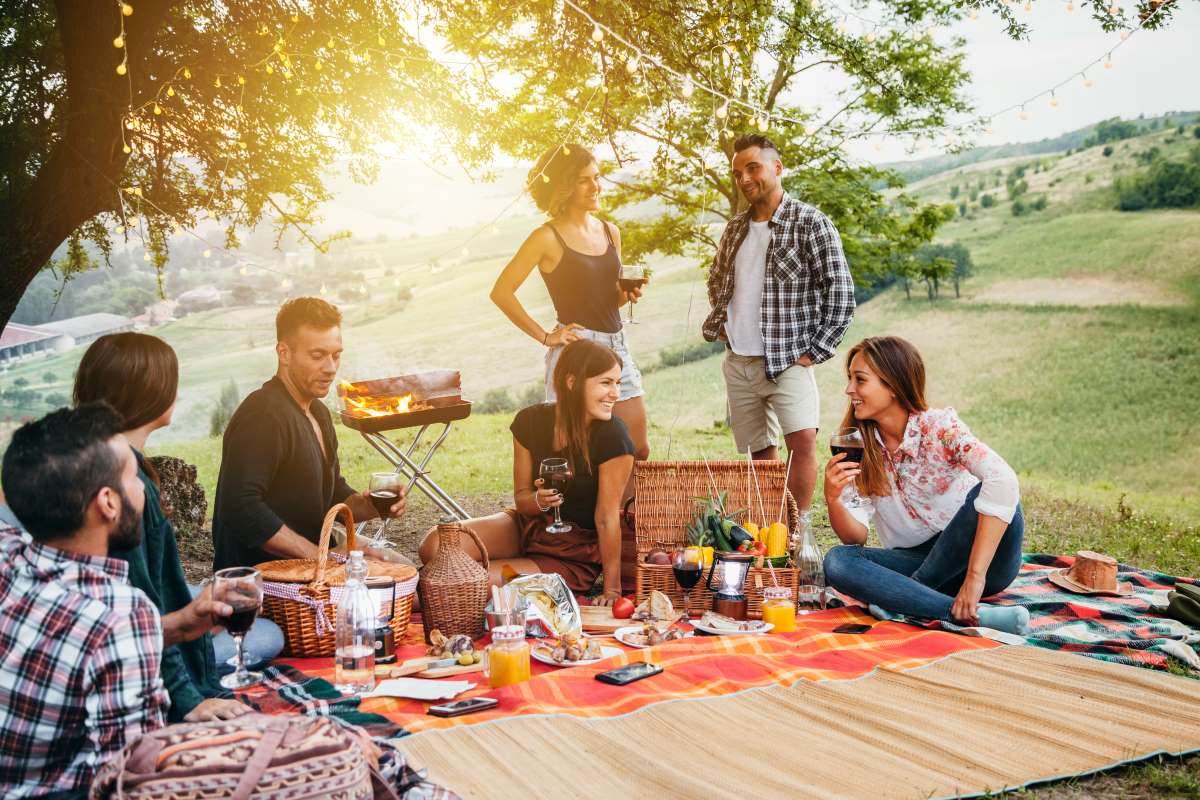 Summer is here and the grill is out!

This can prove a toxic combination of poor food choices creating the perfect recipe for weight gain.

While some fitness-minded individuals will be grilling no matter the season, for the vast majority, these kinds of events represent an unknown ‘danger zone’ that threatens to undo all your hard work.

You’re well aware that if you go ham (no pun intended) on the hot dogs every time you go to a barbecue, that all-important final milestone will drift further and further away.

Luckily, a summer barbecue is not a death sentence to a diet. There are plenty of tricks to make it through events like this without completely losing every bit of progress.

Read on to learn everything you need to know to survive summer barbecue season, overcome pesky food pushers, and emerge with your fitness goals intact. 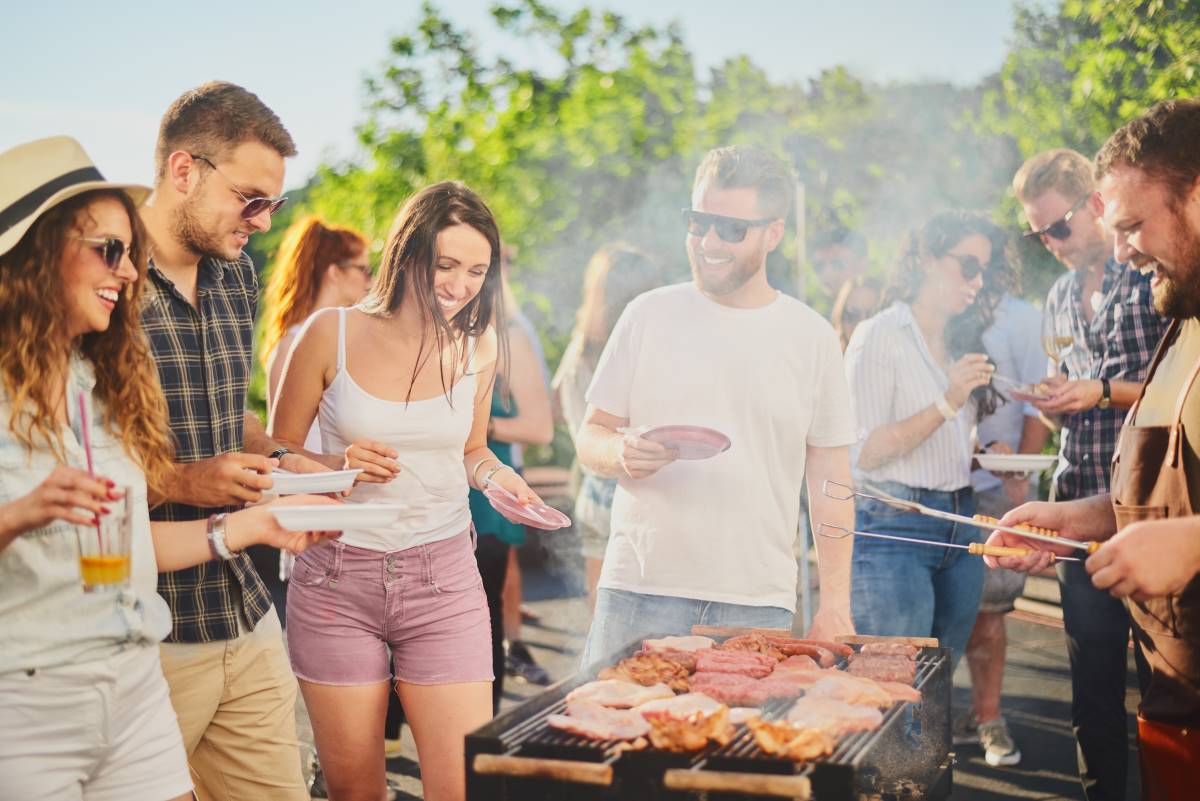 Barbecue obstacles for the well-meaning dieter

You’ve just been invited for a casual weekend get together around the barbecue. Aside from the overcooked beef, charred sausages and an angry sunburn, what could go wrong?!

Unfortunately, if you’re working towards a fitness goal, your neighbour’s friendly barbecue invite could turn out to be a nightmare scenario with a host of potential pitfalls:

We all know those people who can’t let it go if someone they know is on a ‘diet’. You only need to say “no thanks” to seconds or dessert before Frank The Food Pusher swoops in saying “aw come on! Have a taste at least!” or “one more plate won’t kill ya!”

Unless the next bite leaves you requiring a well-timed Heimlich manoeuvre from another guest, one more plate won’t kill you. But it could potentially wipe out progress toward a goal you’ve been working hard for.

A food pusher is often all that’s needed for a dieter to crumble and give into seconds (or thirds). 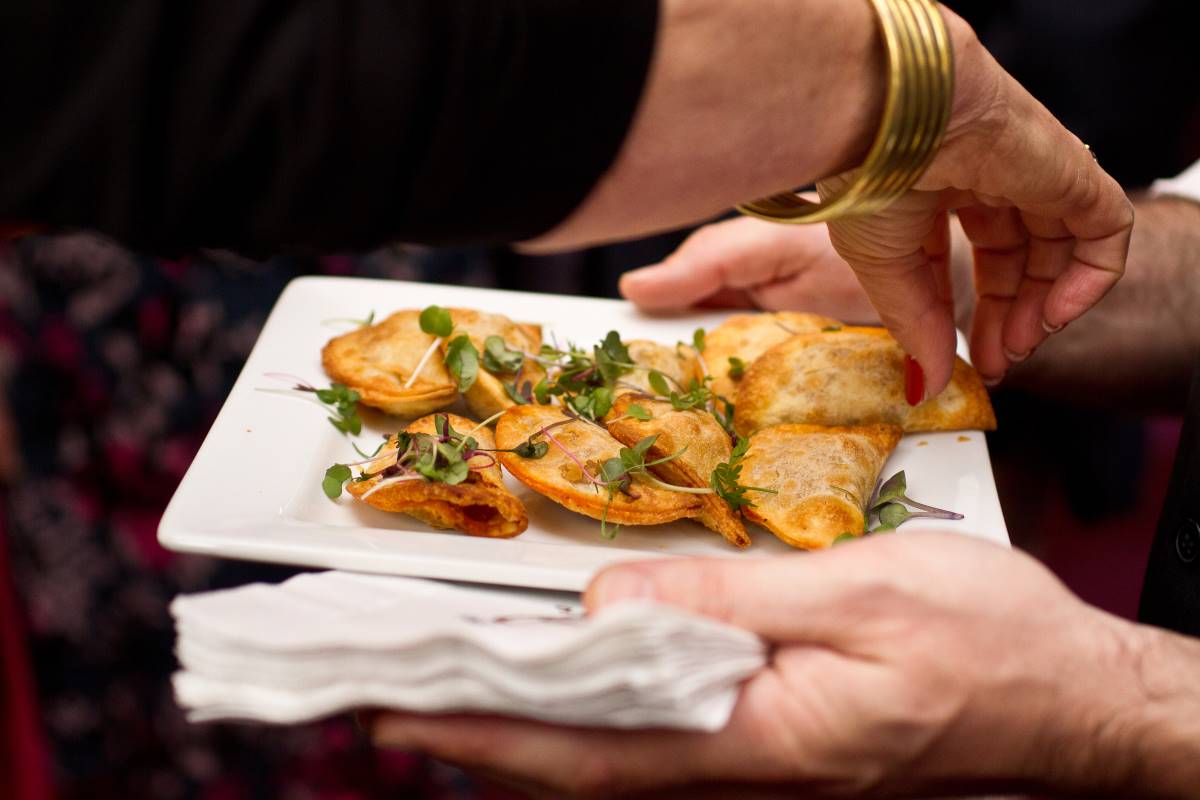 What’s a good BBQ without a good beer? Or maybe that’s what Frank The Food Pusher might say.

Alcohol also has a compounding effect in that it’s much harder to say “no” to desserts after three or four beers.

Ever noticed that chicken from a restaurant is often much tastier than a plain chicken breast cooked at home?

That’s because the restaurant doesn’t care about calories. All they care about is taste, meaning they’ll often use sugary marinades and fatty sauces to make that chicken extra tasty.

Unfortunately, many barbecue hosts will do the same and it’s almost impossible to tell how much sugar, fat and God knows what else has been added! And while a little extra may seem like nothing, over time these extra hidden calories can soon add up and get out of hand!

Manners are always important; this goes without saying. And it would seem rude to show up to a dinner party but then refuse the dinner provided by the host, right?

Some people use this same logic when attending a friendly barbecue and allow this fear of being impolite to be a reason to overindulge.

This might seem obvious but it is something that a lot of people don’t consider before entering social situations. The greasy hotdogs and loaded potato salad do sound good!

And if you’ve been pushing toward a fat-loss goal hard for some time, you probably haven’t had those delicacies in quite some time…

The temptation is suddenly very real. 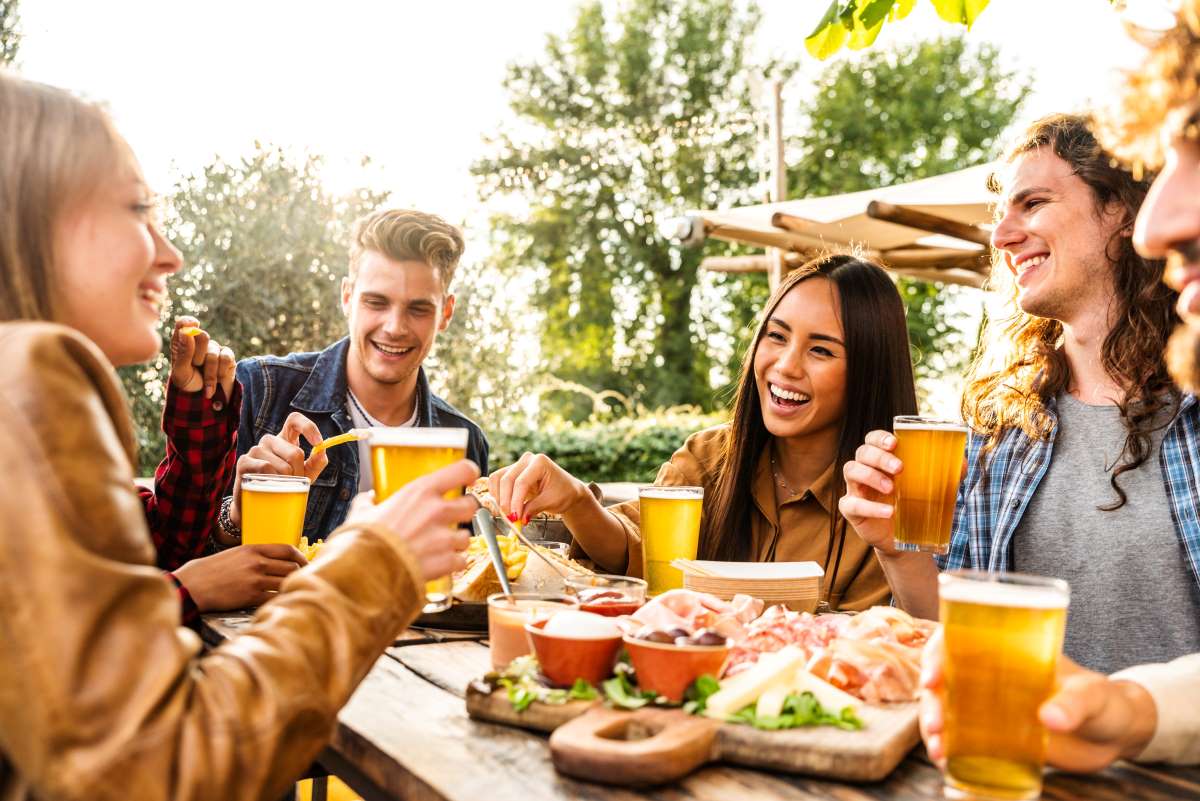 A diet saboteur may sound similar to a food pusher but there is an important distinction.

While a food pusher won’t take “no” for an answer and insist that you eat more, a diet saboteur will call into question your whole goal. They will make snide comments like “don’t get too muscular” or “don’t get too skinny” along with other stupid questions like “why do you want to diet? You already look great.”

Such people are usually covering up for their own insecurities and love to tear down others, especially those who are trying to better themselves. All too often, these seeds of doubt lead many to stray from their original plan.

So does that mean barbecues are off the menu? Far from it!

9 ways to nail your diet through the summer social season

There are doubtless several obstacles if you are trying to stay on track with your health and fitness over the summer.

But, luckily, we’ve got nine top tips to help you maintain your progress through the barbecue season:

It’s always tough to discern what’s going to be served at a barbecue, so be prepared rather than leaving it to the very last minute and relying on other people to fulfil your dietary needs.

If you have been making positive life changes for your fitness journey, you’ve probably also done some form of meal prep. Why not continue the same trend for social outings?

Pack a meal or prepare a few sharing dishes that are conducive to your goals, meaning you can still participate in socialising while staying in control of your nutritional intake. 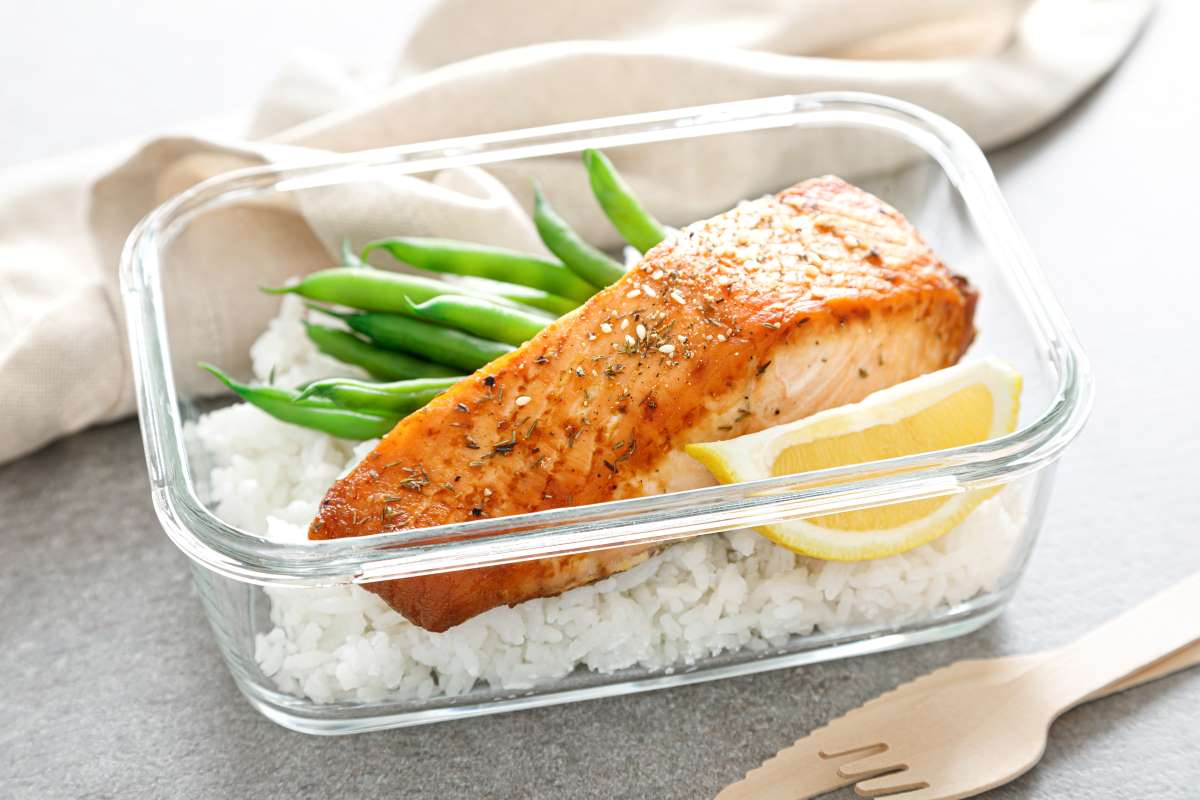 2. Keep a drink in your hand

We all know those awkward silences with the neighbour from two doors down that you don’t know very well.

And without that all-important beer to sip on, it can be even more painful.

Often people feel left out because they don’t have an ‘adult drink’ at social occasions. It may be a cliché but a drink doesn’t necessarily have to be alcoholic to have fun!

Rather than throwing down a sugary cocktail every time a conversation goes nowhere, keep something else in hand.

This could be as simple as water or as refreshing as a diet soda. There are also a number of alcohol-free spirits on the market, which will make it appear as if you have an ‘adult’ drink.

Whichever option you go for, no one is going to offer you a drink if you already have one. 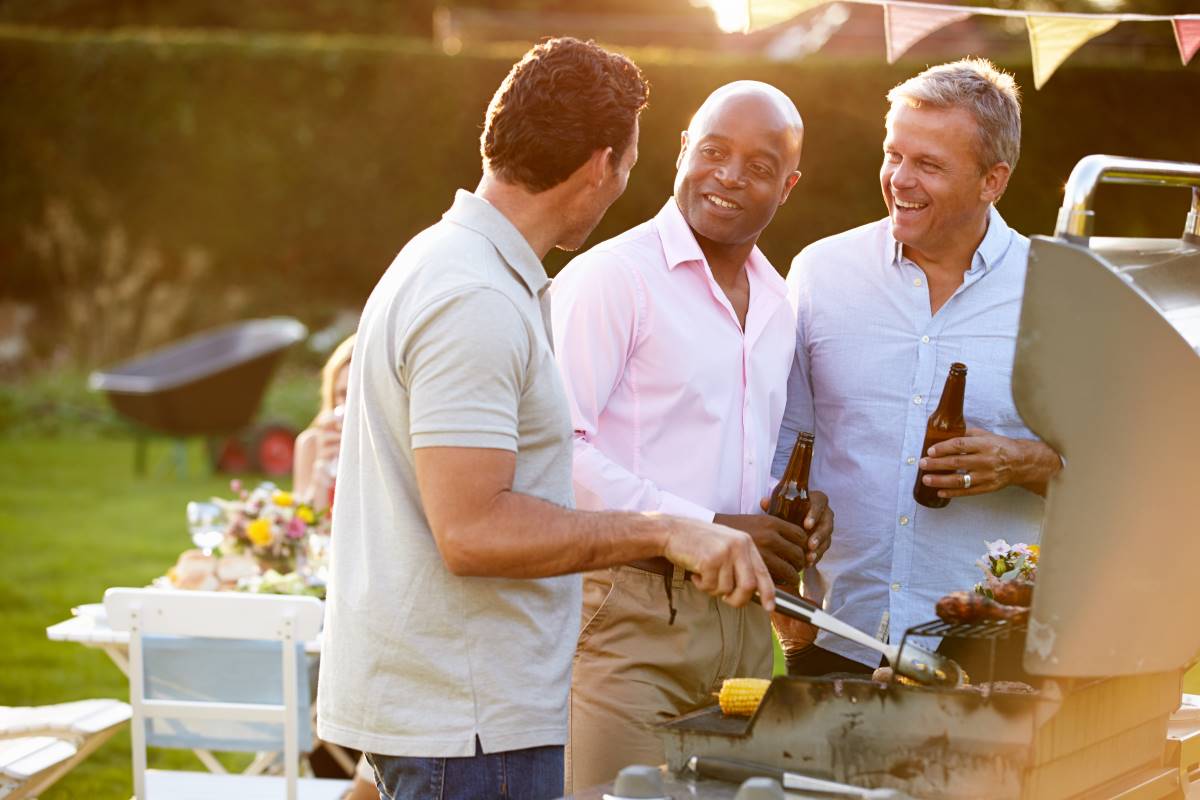 3. Stick to the lean proteins and veggies

When selecting foods, this really is one time where the phrase “throw another shrimp on the barbie” comes in handy.

Try to use the same rules as at home by focusing on lean proteins first, with plenty of high-quality veggies.

Any good barbecue worth its salt will have more than just burgers. Something like grilled chicken wings will almost always be lower calorie, better quality, and higher protein than a standard supermarket hamburger, even if it has some sauce on it.

Pick up a tossed salad to go along with those wings and you got yourself a filling, low calorie meal. 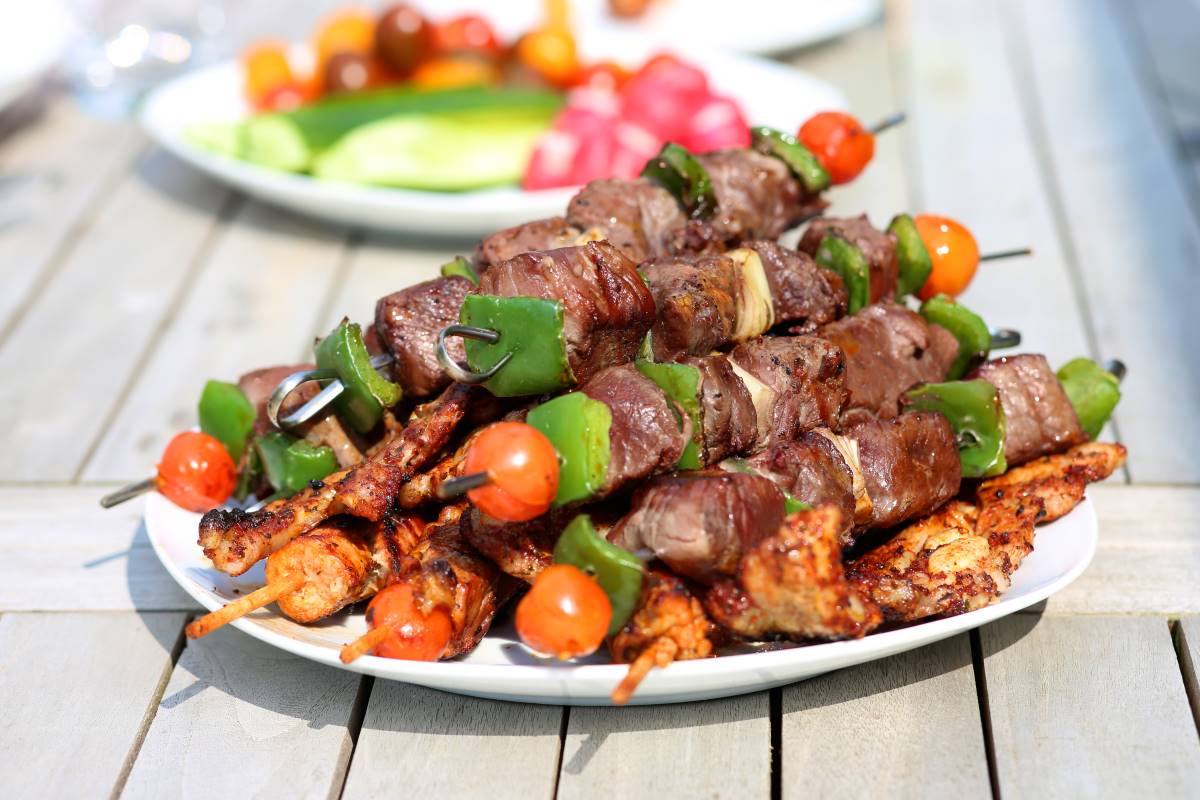 Now, this might sound counterintuitive but if your plate appears to be full, no one can comment or question the food you’ve picked.

If you’re lucky enough to attend a barbecue with lean proteins such as chicken wings as well as tossed salads without high-calorie dressings, you’re already set.

No food pusher can push extra food on you if your plate is jam-packed with veggies. And even if they do, it’s really easy to point out that there’s no room. 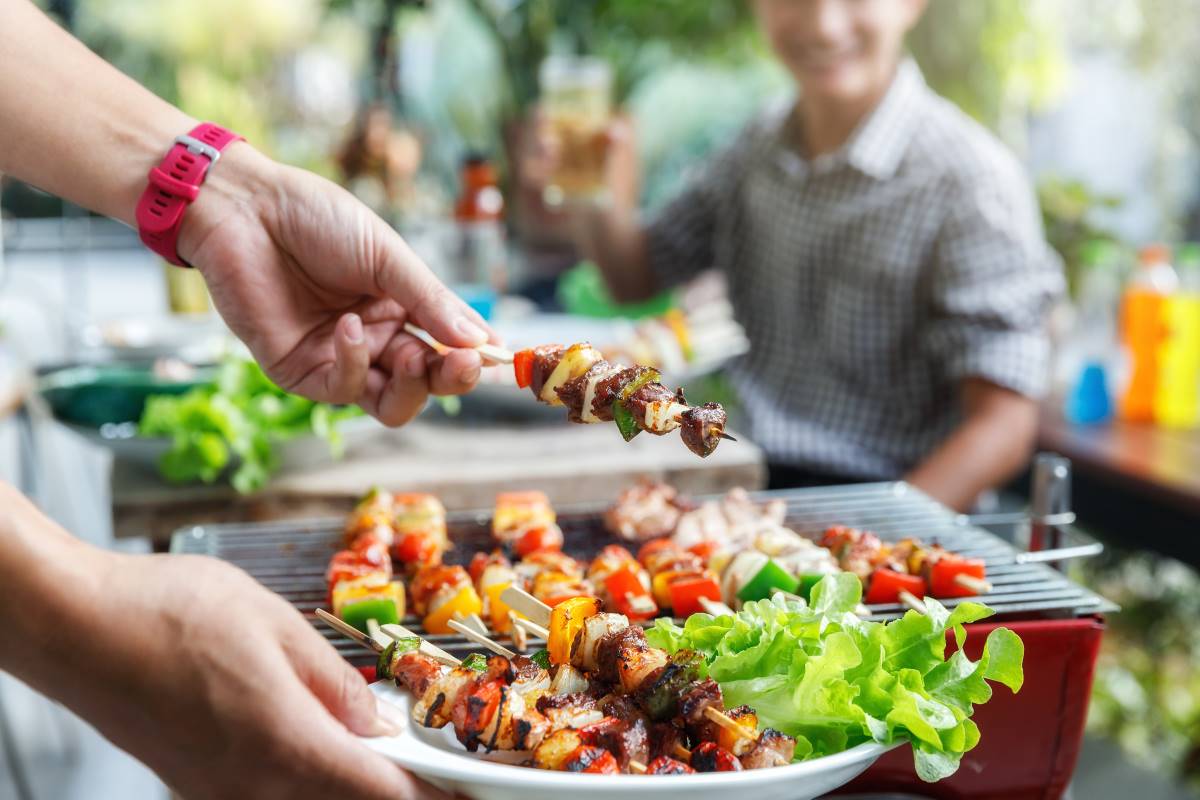 Just like when ordering at a restaurant, food prepared by someone else always brings a degree of uncertainty.

Yes, a sugary marinade can add calories to a lean meat, but fatty sauces are way more calorically dense. 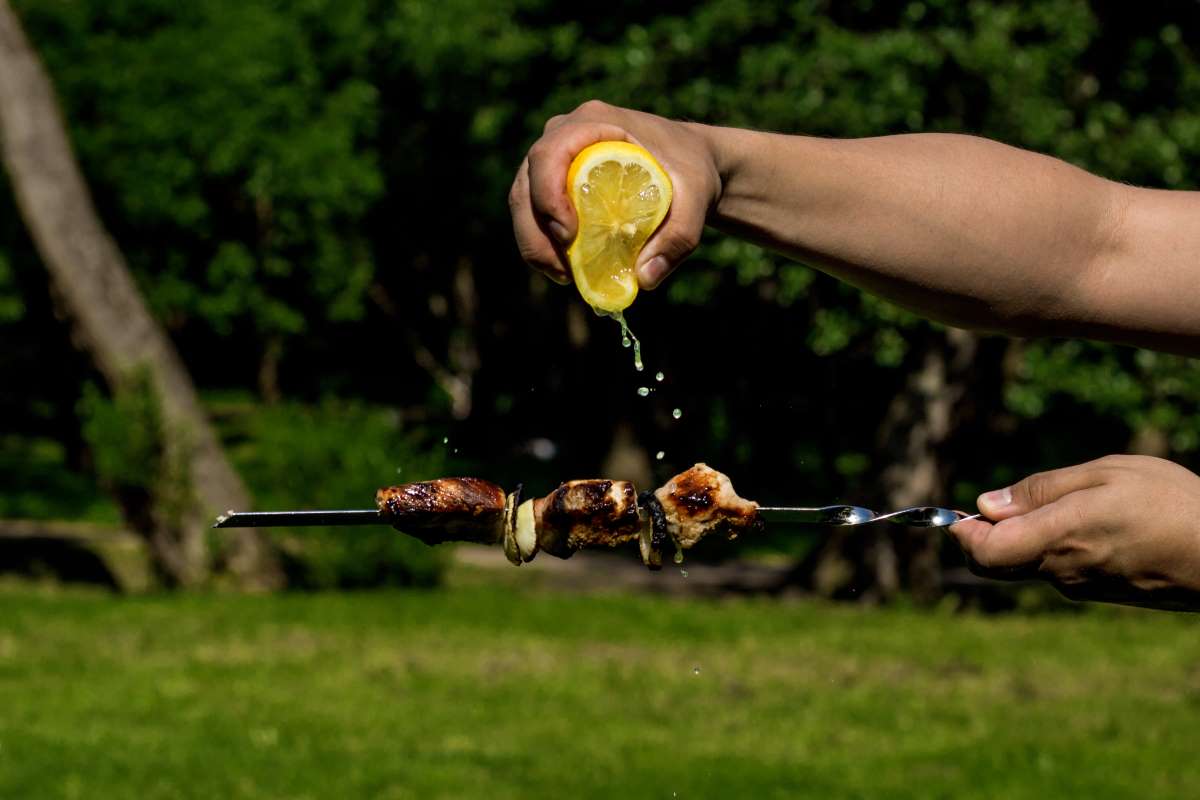 6. Have a meal ahead of time

If you find your home cooked meals very satiating, make time for one before the event.

Loading up on high quality proteins with plenty of green veggies in advance not only means you know exactly what you’re eating, it will also stop cravings in their tracks.

It’s much easier to tell yourself and others that you’re full if you actually are! 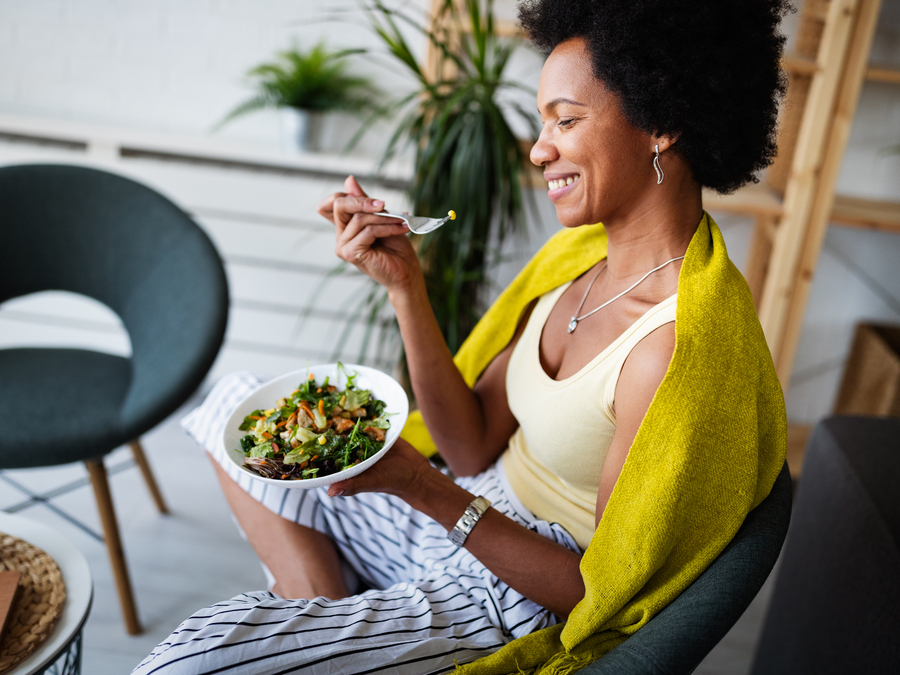 7. Allocate all your calories for the barbecue

Maybe you’ve tried tip number six in the past and it didn’t work… you just ended up eating two meals back-to-back.

In that case it might be time for a different strategy.

Treat your calorie/macro goals like a budget and imagine you’re saving for a big expense (in this case, that’s the barbecue).

Instead of filling up ahead of time, practice an extended fast during the first half of the day.

If you’ve ever tried to get your daily allotment for protein in one sitting, it’s actually very difficult!

The only caveat here is that this option may not be optimal if you tend to be someone that inhales everything in sight when hunger comes knocking. 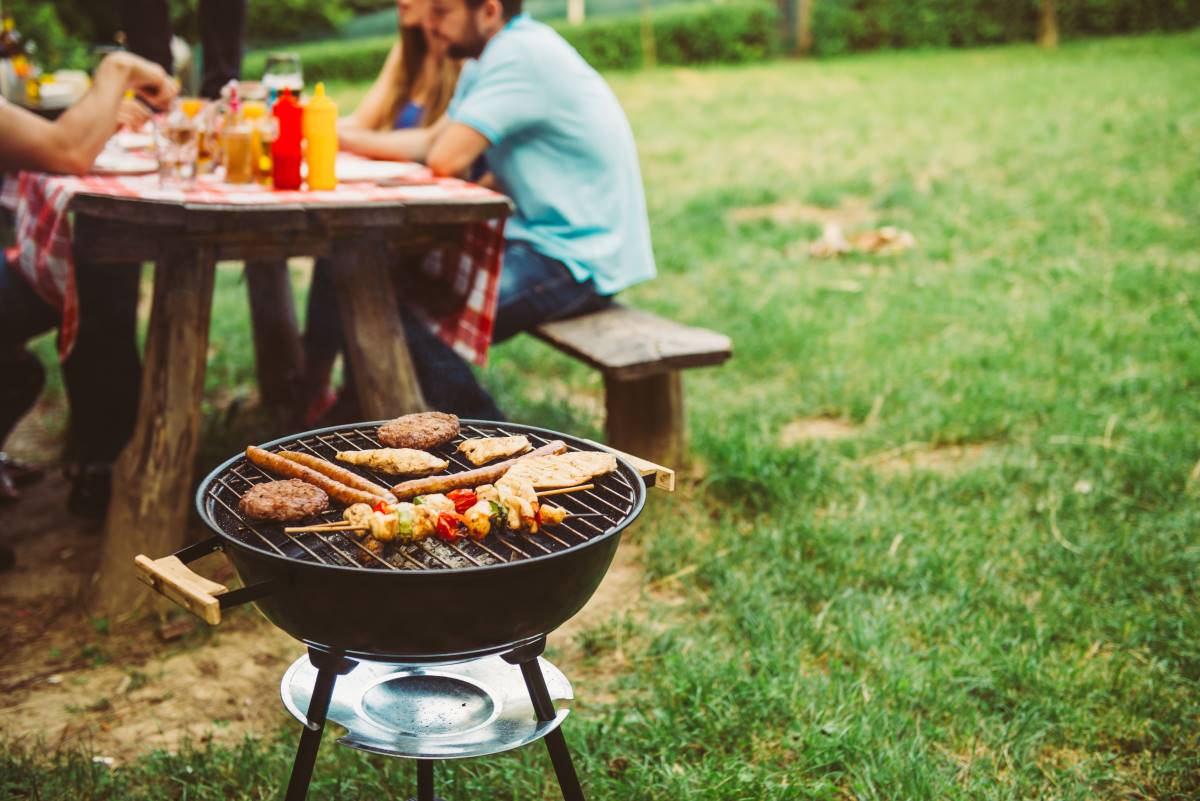 8. Just don’t mention that you’re on a diet!

When it comes to dealing with food pushers and diet saboteurs, this a great deflection.

Telling some people that you’re on a diet or following a fitness program provides them with ammunition to question your motives or come up other convincing arguments.

Rather than give them the opportunity, just don’t mention it! If a food pusher suggests more food, say you’re full and leave it at that. 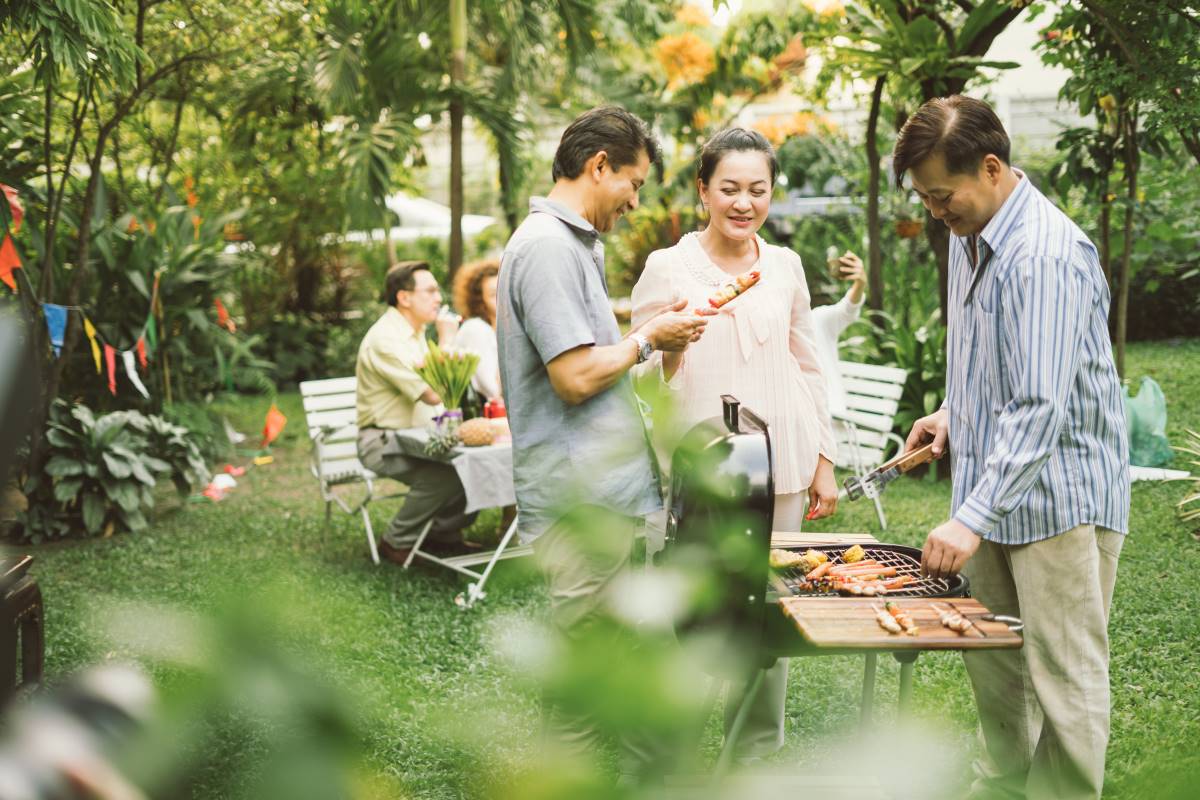 It may not have worked on the War On Drugs, but it can work in interpersonal relationships.

An obvious comparison is alcohol. If someone is an alcoholic, they have to say “no” in social situations all the time. They still hold jobs and go to social gatherings, yet they do not partake in everything.

Similarly, if you were taking antibiotics or allergic to a certain food, no one would bat an eyelid.

It’s not always easy but going into social situations prepared to say “no” will make life a lot easier.

Socialising and festive celebrations are always a potential obstacle during a diet. But in summer there just seems to be something every weekend!

And this can be a minefield if you’re working hard towards a fat loss goal.

Hopefully, now you are armed with a few new tricks, you’re ready to fire up the barbie and face the summer festivities with confidence.

But if you need someone to keep you accountable, get in touch today to find out how we can help.