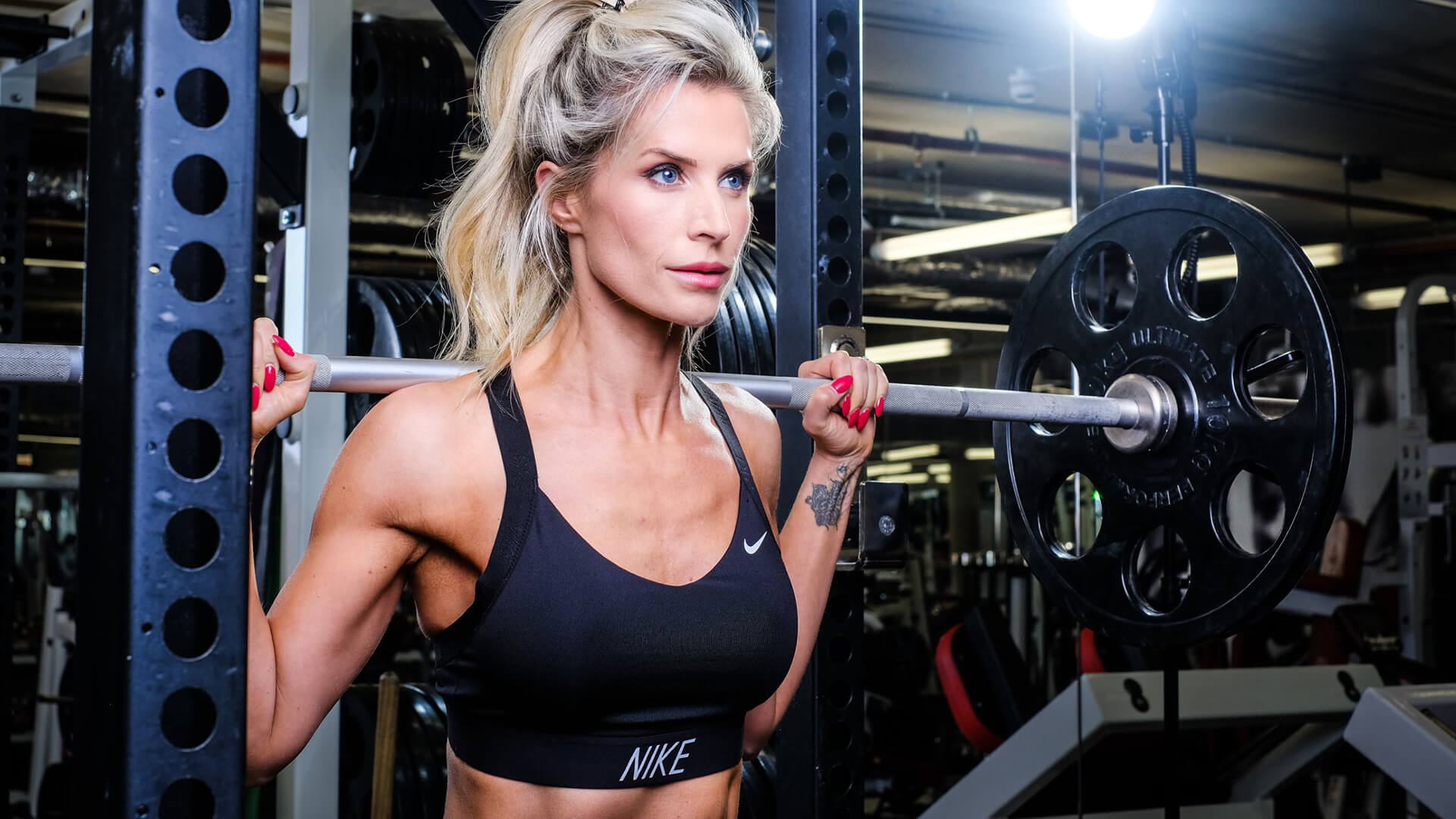 Seven weeks in and I’ve got abs!

The scales say I’ve lost 5kg and the calipers show I’ve lost a third of my body fat so far – that’s great progress, but those are just numbers.

The real benefits of doing a transformation like this are how you look and feel.

Seeing my abs for the first time was one of those milestones that makes you feel great and shows how far you’ve come.

I had taken my progress pictures for the week and my trainer Mark said ‘your abs are starting to come through’ and I was just like ‘Oh my god! That’s so exciting!’

It was a really nice feeling – it’s just one of those personal goals where you feel confident and you feel good.

I had to wear gym gear while filming at work the other day, and where ordinarily I’d have wanted to put a baggy top over it or something looser to hide my modesty, I actually felt really confident and I was happy to wear just a sports top and leggings.

It still amazes me that it’s only taken seven weeks to get this far.

What amazes other people is that I’ve not had to do one single sit-up during the whole programme to get here.

I’m not having to kill myself every day for hours on end in the gym either.

I do three 45-minute strength sessions per week and add on three 30-minutes of cardio too.

That’s less than four hours total in the gym over a week.

It goes to show that less can sometimes be more when it comes to training.

How my training is changing…

We’re constantly increasing the work I’m doing in those sessions to keep me progressing – it’s very clever how it is done.

Actually, although we’ve increased what I’m doing, it doesn’t actually feel like much more.

I’m not feeling like ‘oh my god it’s so much tougher’ or ‘we’ve increased the weights’ or ‘I’ve got to do 10 more exercises’.

When we increased the amount of cardio I was doing on top of my strength training sessions before my photoshoot, I thought ‘Oh gosh!’

I thought it was going to be loads of extra work, but I actually really enjoy the cardio because it’s just an extra half hour each time.

I get in there, get my head down and get on the treadmill and I do some interval training and mix it up.

It’s shorter bursts of work – high-intensity stuff. You can just get on the treadmill and just go for it.

I’ve either added those onto the end of my strength sessions or I fit it in early mornings or after work.

It’s just a case of prioritising it when you know that getting those extra sessions in will make all the difference to your transformation.

More carbs and more food in my diet!

My diet now has been tweaked slightly too.

I’m now introducing carbs two days a week to pretty much every meal.

Because we’ve now got to a point where I’m quite lean and I don’t want to lose muscle or look too skinny, and I want to look healthy, strong and athletic, the plan is to have more carbs, which is great,

I’m sitting at around 16% body fat and I’m losing fat from the areas that I want to target, so energy-wise and training-wise, I’m having two days where I get carbs at every meal.

That’s quite a nice little treat.

So on Saturday, after I’d had a night out as well, I got to have carbs with my breakfast – so I had my eggs and then I had some porridge too, which was a treat.

Then I had rice with my lunch and sweet potato with dinner. It has made a big difference. It’s a nice reward.

It gives you a boost and gets you training that bit harder.

It gives you something to look forward to and work towards.

Some people are afraid of carbs, but you don’t have to be.

I love my carbs. I enjoy oats. I have porridge or throw them into my protein shake which makes for a really filling mid-morning snack.

I love sweet potato too.

There’re not bad carbs. It’s not like you’re eating a loaf of bread or sugary stuff you shouldn’t be having.

Another go-to I’ve had for a cheeky snack is oatcakes and a little bit of almond butter. It’s really nice as a little treat.

It’s finding what works for you.

It’s amazing that I’m now eating more food than ever as the transformation goes on, when normally you’d expect to be eating less and less.

It’s a great way of doing things. I’m seeing massive results and those little treats are coming in too.

Getting to the last few weeks you’d imagine any little treats would be taken away from you, but it’s actually the other way round.

How my online training works…

I’ve got my training programme on my phone and I can just go into the gym and just focus on giving it 100% effort.

Everything is on my phone, so I just tick off what I’ve done, what weights I’ve lifted, how many reps I’ve managed, and how many steps I’ve done each day.

I’ve also got my food tracker on there as well so I know what I can eat and I’ve got all the different measurements for the different foods I eat.

I’ve also got my daily tracker so I can fill in when I’ve trained and when I’ve done cardio, what I’ve eaten that day, what my weight was in the morning, my energy levels and how I’m feeling.

It’s such a good system that UP have got in that you’ve got all the information you’ll ever need there.

You’ve also got a PT on the end of a phone who is checking all the information you’re inputting and checking in with how you’re getting on.

It’s great. You’re never on your own and you have your online trainer there every step of the way, monitoring your progress, adjusting your plan and ensuring that you’re doing everything right – it really gives you that reassurance that you’re on track every single week.

It’s been brilliant doing this online, in my own time, because I’m so busy with work and family life.

I’ve not got time to get into the gym with a PT three or four times a week, I just can’t do that with work, with Stanley, and just life in general.

So just having that online guidance and support is just perfect – I just fit in my own training sessions into my schedule.

The last couple of weeks I’ve not felt 100% – and if I was training on my own, I’d have probably just taken the week off because I didn’t quite feel right.

What has really helped is having someone to keep you on track, but also to make sure you’re okay and that you’re not overdoing it and that you are doing things right.

It’s not felt like a struggle or a chore – I’ve actually been surprised by how easy I’ve found it (I don’t mean the training – the sessions are tough and push me to my limit.)

But it’s how easy I’ve found fitting in the sessions, prepping the food, finding the time to do everything.

Looking at it on paper before I started, I would have thought ‘I’ll never be able to do it’ with a job and a child and everything.

But it is doable, and the support you get is invaluable.

Seeing the fat loss is a huge motivator…

Everyone has asked how I stay motivated.

I’ve found it easy to motivate myself (especially with my wedding just weeks away).

But it’s like someone constantly giving you a little confidence boost.

Seeing my progress pictures every week and seeing my body fat drop really keeps me focused and motivated too.

It gives you that psychological boost seeing the numbers in black and white when perhaps you don’t feel like you’ve progressed.

This week I didn’t feel like I’d lost anything and I was a little bit bloated.

But I had my measurements and I’d lost another percent in body fat and my weight is down to 53kg now.

UP’s BodyProphet app shows exactly where you’ve lost fat from and can explain why you’re losing from that area.

For me, it was mainly to do with the food I was eating as to why I held fat in certain places.

I was holding fat around my hips and lower back.

That’s where I’ve seen the biggest drop from – I have dropped from like 35 down to 10. That’s massive.

For a woman that’s perfect as that’s mainly where you hold onto fat and that’s where you want to lose it.

I’m really pleased with my results so far!