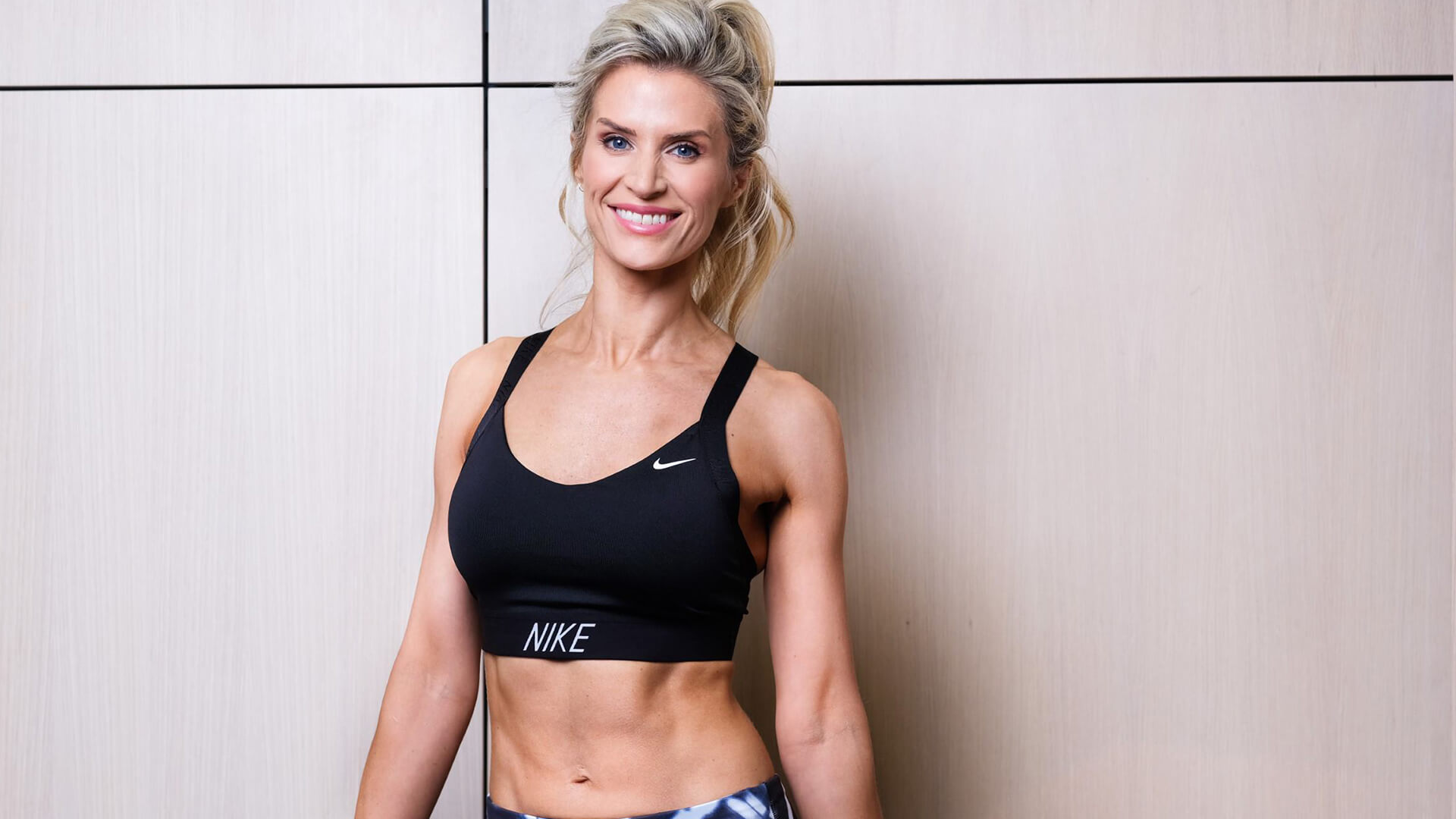 One slip-up doesn’t have to spell disaster.

But that’s not the case – if you fall off the wagon, it’s how you respond to it that counts!

I found this after I went out with the girls on my hen party in Leeds last weekend.

I had been on-point with my diet and training all week – but with the hen party, I knew Saturday was going to be a write-off.

I had an amazing time, but it wasn’t worth it. It was the worst hangover I’ve had in my life!

I have been so good since the start of January and this was the first major time I’d fallen off the wagon with drinking and eating properly.

It had a knock-on effect on my training. On Sunday I thought I’ll have a day where I’ll try and be good, but I fully intended on being back on it on Monday.

I was going to train myself on Monday and get back into it, but I was still so ill!

It meant I didn’t get back to training in the gym until Thursday and I was worried that I had undone all my progress from Week 1.

We did my measurements on Thursday because it had been two weeks exactly since I started my transformation.

But despite not being 100%, I’ve still managed to make really good progress.

I have dropped 6lbs, which I wasn’t expecting at all. I’ve also lost 1.6% body fat too.

I was made up! My trainer Mark was like ‘this has dropped really quickly!’

I’m really pleased. I feel like I’ve got away with having my hen do, which is behind me now and I am right back on it again.

Just cutting out sugar, cleaning up my diet and being a bit more organized with my food has made a really big difference to the areas I want to work on like my hips and tummy.

I’m not saying ‘it’s okay to do that and go out drinking’, but it shows that if you do slip up, or you have the odd meal that doesn’t go to plan, in the grand scheme of things, it doesn’t have to make too much of a difference if you’ve been doing everything right and you get back on track as quickly as possible.

I didn’t expect to have lost quite so much so quickly. I thought I might have lost a couple of pounds at most

So it was amazing to see I’d actually achieved a lot more in that short space of time. It’s just blown my mind but it’s also got me excited and motivated to carry on.

ARRANGE YOUR FREE UP CONSULT AND START YOUR TRANSFORMATION TODAY

Tracking everything makes a big difference

One thing about UP is the way they scientifically track everything so you can see progress happening before your eyes.

I’ve tracked things in the past but never really stuck to it. It does make a big difference.

The food tracker I fill in for Mark has been really helpful. It’s useful for Mark to see what I’ve been eating, when I’ve been training, and where I’m at.

It’s good for me to track my workouts too. I’ve been able to up my weights again on a couple of the exercises and then upped my reps on some of the squats.

If you’re not tracking that, often you push yourself to where you think ‘okay I’ve done enough now’.

But I looked at my tracking and I thought I can definitely do a bit more on this. Then I write it down so that next time I can push it even further.

My goal was to be in prime condition and to be stronger, fitter and healthier again, and to just feel like my body is at its best.

I did it after I had the baby – almost out of curiosity because you want to see how your body has changed and see the difference with pre-pregnancy.

I’ve tracked body fat before, but not consistently. It’s an awkward thing to do without a professional helping you.

It’s good to have someone there to do your calliper measurements and take them accurately so you know you’re getting a true reading.

I saw some good drops in body fat and my trainer Mark was able to explain to me why I had dropped in those areas.

Being a woman, I lost the most body fat around my hips, my tummy and my lower back – Mark explained holding fat here was linked to eating sugar and bad food habits.

Previously these bad habits had crept in – you comfort eat or you grab food on the go which can be full of sugar.

But just cutting out sugar, cleaning up my diet and being a bit more organized with my food has made a really big difference to the areas I want to work on like my hips and tummy.

Shaping my body how I want it

I’m in a great position now. Mark says I have dropped more body fat than predicted and I can still consistently drop body fat at this rate if I stick to things 100% with 10 weeks still to go.

This means we can now think about targeting specific areas to tone up and build muscle and work on where I want definition.

It’s nice to have that now as my goal – not just to get in good condition, but actually to go ‘I would like slightly more definition in my arms or more definition on my waist.’

I’ve not got an ideal look in mind for the wedding, but as I see my body changing I will know where I want to work on.

My goal was to be in prime condition and to be stronger, fitter and healthier again, and to just feel like my body is at its best.

But I think now I know we can work specifically on things, it’s nice to think in a few weeks that we can pinpoint areas of my body that I want to improve and that we can cater the workouts and nutrition to that.

There is always time in your weekly routine to go to the gym if you want it badly enough.

That’s what you get with the training. You see people going for years going to classes or even going to a trainer, and just work and work and work and never get anywhere, or go ‘I’ve still got a tummy I can’t get rid of’ or ‘I still want more definition in my back’ and they don’t ever get there.

It does feel this is being prescribed for you personally, which is absolutely is.

It’s nice that you can work to your end goal and you know that you will get there, which is the exciting thing.

I’ve already had a couple of people go ‘have you been going to the gym more?’

One lady at work said ‘Sarah! I can tell you’ve lost weight across your shoulders and in your face a bit’ and she didn’t know if I’d been training, so that was really nice too.

It shows that the hard work is paying off and already people are starting to notice the changes that I thought were quite subtle.

Jon said to me yesterday ‘you look really healthy’ and I was like ‘thanks! I’ve drunk two litres of water today, that’s why’.

That’s it, you’re drinking loads of water and giving your body exactly what it needs, and training. It does start showing on the outside.

NOT NEAR A UP GYM? START YOUR ONLINE BODY TRANSFORMATION TODAY!

Getting results and making changes to your body means you have to make training and nutrition a priority.

It can be difficult to fit it into your routine at first – especially around work.

Sometimes my schedule physically doesn’t allow me to get to the gym. It’s not an excuse – I have to leave the house at 6 am so I can’t go before work because I’ve got Stanley.

Then I got get home until 7:30 pm and then I’ve got to put Stanley to bed and eat. So sometimes there’s just not an opportunity to go, so that’s tough.

But there is always time in your weekly routine to go to the gym if you want it badly enough.

I’d missed sessions early in the week, so I made sure I got to the gym early on Saturday morning.

I have a set programme and my trainer Mark says I have a minimum target of three sessions a week to get in. If you want results, you just make it happen.

It is difficult, but you just do it. The buzz from training you get and the changes you start seeing do motivate you to do that.

Making training a priority is key. When people say they’ve not got time, or they’ve got to do this and that, you’ve actually got to go ‘how important is this to you and do you want to see results? Do you want to be fitter, healthier and stronger?’

If yes is the answer to all that then you have to prioritise the training because that’s the only way it’s going to happen.

It’s just an hour or sometimes even less. This morning it took me 45 minutes I felt amazing for the day then.