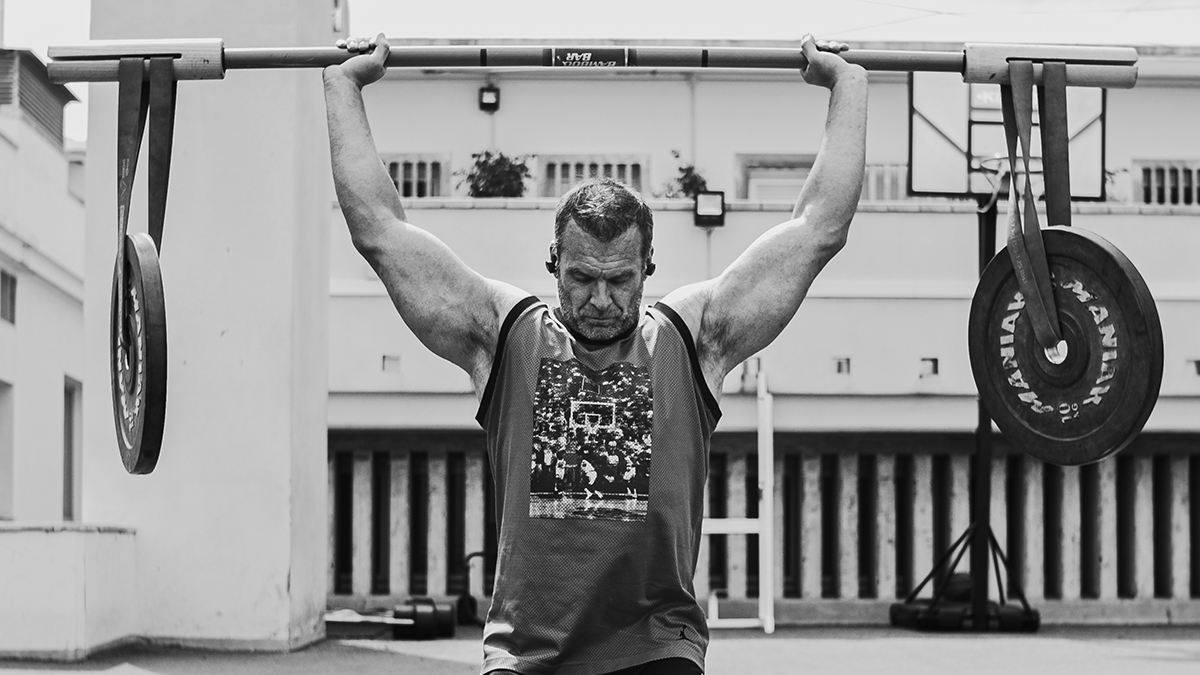 Nick Mitchell: Why it’s important for men to improve testosterone

The impact that menopause has on women’s health is a widely-discussed topic.

But men can go through a similar life stage, loosely termed ‘andropause’, where declining levels of testosterone in the body can wreak havoc on mental and physical health.

So why is dwindling testosterone so bad for men’s health? What are the signs and symptoms to be aware of? And what can be done naturally to improve them with diet and lifestyle measures by men to support optimal health and testosterone production?

Ultimate Performance Founder and CEO, Nick Mitchell, discusses the topic of andropause and low testosterone in men in an illuminating video interview with PR and Content Manager Ben Kenyon.

BEN KENYON: One of the things I wanted to also ask you about is; obviously, we’re focused on health at whatever age at Ultimate Performance, whether you’re 20 or you’re 80. And obviously, there’s a lot of talk about menopause at the moment, and women go through life changes. You do read some stuff about that the andropause or the ‘male menopause.’ What is that? Is that a real thing? And how does it affect men’s health and well-being?

NICK MITCHELL: Is male menopause a real thing? It’s not a real thing in the way that menopause is a real thing and ‘the change’. Women go from being fertile, and then they become infertile after a certain point. And they go through harder, more obvious physical changes.

Testosterone levels in the man, in the male, in the last 50 years have declined by 25-50%. Male fertility has declined by 50%. I mean, that’s a sole subject for another day, right? So, if you want to look at the inequity between men and women and their health, all that we should do is look at how medicine traditionally has handled what happens to a man as his hormones decline versus what happens to a woman as her hormones decline.

Symptoms of low thyroid are everything from being cold, losing your hair, decreased sex drive, depression, listlessness, no energy. Combined with a low thyroid reading, you’re going to have a mature conversation with your doctor about taking thyroid hormones. Very tried and tested very common. For sure, a huge percentage of the population watching this will do it, or one of their relatives will be on thyroid medication.
You can’t have the same conversation about testosterone. You can in some places in America, but if a man is exhibiting low testosterone, his drive for life is gone, his passion for life has gone. You’re almost certain to find that in the suicide rates with men, I think there’s a very, very high suicide rate for men in their 60s and 70s. Very, very high. Their drive for life is gone. Their purposeful life is gone. And when you take someone’s testosterone away, that’s what happens.

I 100% believe that if a man is experiencing the symptoms of low testosterone, he should go to his doctor. He should get a test, a simple androgen profile test – it’s very cheap. If there’s a UK audience, I’m pretty certain if you go and describe symptoms of low testosterone, a decent GP will give you these tests on the NHS. And then if you’ve got the symptoms and you’ve got a low reading, I see absolutely no reason why a mature, intelligent, considered discussion around testosterone supplementation shouldn’t be taken.

BEN KENYON: Are there things you can do to promote your own body’s endogenous supply of testosterone, then what can men do on that?

NICK MITCHELL: There are loads and loads of things you can do to improve your own, let’s call it, ‘testosterone profile’ as a man. Sleep better. Take some magnesium before you go to bed. Make your room a bat cave. I use a sleep mask, which is a ridiculous idea that you’d imagine only like a Hollywood movie star would use, right? But there are like £10 on Amazon for a sleep mask. And now I swear by it. It covers my ears as well.
Make your room as dark as possible. Sleep in the sleep mask. Go to bed at the same time. And don’t, whatever you do, go on your laptop or go on your cell phone within three hours of going to bed. If you must make it short and sharp. Don’t be lying in bed watching a movie, playing a game, or checking social media. Read a book. You know, we should use our beds for reading books, having sex, and sleeping. Three things, and three things alone, is what we should use our beds for.

That will make a profound difference. With men, though, as they approach middle age and the getting middle-age spread, the critical thing for a healthy testosterone profile is to limit a hormone called sex hormone-binding globulin (SHBG). And what this hormone does, is it basically attaches onto the testosterone that’s circulating around the body, and it prevents it, sex hormone-binding, right? It binds to it and stops it from being used. That comes with inflammation, and it comes with being overweight. The more fat you have, the higher your sex hormone-binding globulin levels are. So it’s really important to keep your body fat levels down.

In actual fact, the optimal body fat percentage for maximising your body’s own natural testosterone production is probably 8-10% body fat, and 8-10% body fat is very lean. It’s very lean. It’s having a visible six-pack. It’s having no love handles. It’s not linear – you’ve got to be 10% body fat or 8% body fat to have decent testosterone levels, that’s rubbish. But if you’re 25% and you bring yourself down to 15%, which means you might have an outline of the top couple of abs, you’re not ripped by any means. Your hormone levels will be massively improved – massively improved.

And then and I’ll finish with one last tip because I know people like this kind of stuff. So, I’m 48 – I am 49 this year, God help me. I get all my levels checked fairly regularly, and my SHBG levels, my sex hormone-binding globulin levels, are really low – they’re really good, especially for my age because I stay relatively lean. I’m not endorsing Solgar – any brand will do. Boron – I take 6mg – two of these. I mean, this is really cheap stuff. I take 6mg of boron every day. And there are lots of studies that show that it helps reduce the sex hormone-binding globulin levels as well.

BEN KENYON: So have you been tracking this regularly then, since you’ve been taking boron?

NICK MITCHELL: No, not since I’ve been taking boron. But I know my SHBG levels have dropped since I’ve started to take boron, yes. And there’s also plenty of data on it as well. I get my hormone levels checked once a year, maybe a little bit more often. But again, I’ve been dealing with mycotoxin illness and everything else, so I get a lot more regular blood work. So, I’m not guessing; I know what works for me.

BEN KENYON: What role does resistance training play in this as well? You know, testosterone and stuff.

NICK MITCHELL: There’s speculation that resistance training can improve your hormonal profile, that can boost your testosterone levels a tiny bit, but it’s so small; direct consequences are so small, I wouldn’t pay any attention.

BEN KENYON: Simple, when you put it like that. For anyone that is middle-aged, that’s maybe suffering with E.D. (erectile dysfunction) or low sex drive or any of these associated problems with like ‘andropause’, can people expect to feel the difference, or see the impact of making these simple but profound changes, do you think?

NICK MITCHELL: It depends. The short answer is; it depends. It depends on how bad you are. It depends on how bad you are. I will never forget a client coming to me, 10 years ago, he was working with one of our trainers at U.P., and he said, ‘I want to thank you. I haven’t had an erection in three years, and now I’ve got one.’ He was morbidly obese, living a terrible life, a lawyer, and he’s just started to look after himself. When he said this to me, was he 8% body fat and a ripped stallion or a stud? No, not at all. He was an ordinary-looking guy, right? In much better shape but didn’t look particularly athletic or anything like that, but he’d dropped, probably off memory, 30kg or 40kg.

I would get outside, no matter the weather, before nine o’clock in the morning to fix my circadian rhythms, again, because your hormonal profile is built around circadian rhythms — melatonin production in the morning and at night and all these kind of things. I would watch my diet, and I would lean up, within reason — I wouldn’t starve myself. And I’d focus on my sleep. I’d do all of those things. I’d wait a few months, and I’d see what happens. And then I’ll go back to the doctor. And if you’ve done all those things and everything is looking better, but you still got an issue, then let’s use modern medicine.

BEN KENYON: But you’re saying before you get to that point, as an almost last chance saloon, there are big rocks that you can break…

WANT TO KNOW THE LATEST FROM OUR ‘MEN’S HEALTH SERIES’? CLICK HERE TO LISTEN AS NICK SPEAKS ABOUT HOW MEN CAN FOSTER BETTER MENTAL HEALTH.