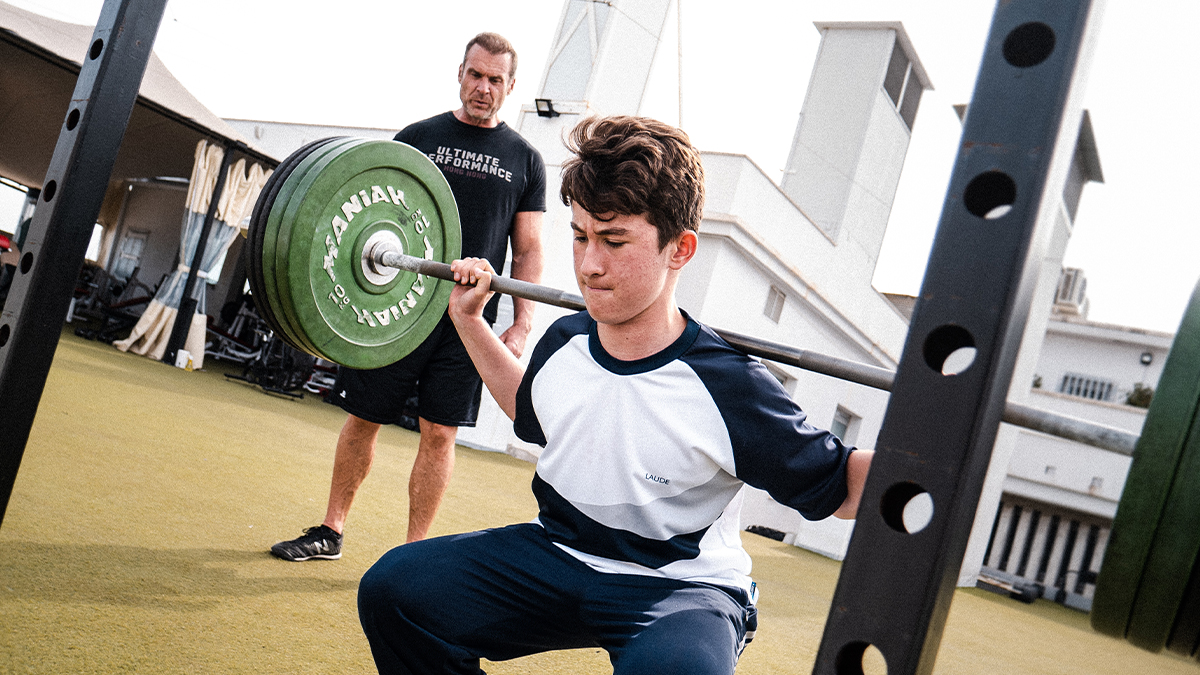 How do you raise a man?

But not the kind of education they teach in school.

Nick talks about teaching boys the importance of sport and exercise to help them grow up to become robust, resilient and healthy men.

BEN KENYON: You’ve been training for 35+ years now and obviously, still learning, still developing your knowledge and you’ve worked with tens of thousands of clients, at what stage do we need to start educating our men, or our boys, about health and about these kinds of things? Because, obviously, you spent 35 years learning this stuff and not, everybody will devote so much time and attention.

NICK MITCHELL: That’s a question that resonates very well with me. I have a 12-year-old boy and a 10-year-old girl. My job as a father is to teach my children everything that I know and to create better humans than I am. So, looking specifically at my boy… it’s starting out giving him the confidence to move his body. Helping, giving him the love of exercise, which you cannot force on someone. You walk them slowly, baby steps into it. It’s setting expectations around what is good food, which is something that both my wife and I have done.

My wife will take the lead on that. She’s the primary caregiver in many ways for that kind of thing. I’ll take care of the more sporty angles of stuff. So, it’s just purely education. It’s purely education.

If I sit like this, and start talking to you now, I start to feel down, my tone will change. If I do this [clap] and come up and I change my posture. If I force myself to smile (and you know me well Ben, you know I have to force a smile out, right?) so, if I force myself to smile, instantly things come a bit better. So, you can’t divorce the physical from the mental, and what we should be doing with boys and men is teaching them that it’s part and parcel of the same thing. We have to teach them that it’s not unmanly to ask for help, because it’s not. While at the same time telling them that traditional male qualities are not a bad thing.

Because unfortunately, that’s the pendulum which always swings; the cultural, political pendulum, now dominated as it is by America, it doesn’t encourage boys to be boys. Rambunctious boisterous boys are not what school teachers are looking for by and large, at least in America. The standard of behaviour that they want is more typical of a female, of a girl. ‘I’m going to sit quietly in class, I’m going to be organised, I’m going to put my hand up and I’m never ever, ever, ever, ever going to resort to any kind of physical confrontation’.

Whereas I think, if a couple of 10-year-old, 11-year-old boys, who are of the mind to do it (not all of them will be), if they need to have a little tussle and get it out and air their grievances physically, they should do it because that’s what we’re wired to do. And you and I both know that young boys, not when they’re older, it changes, but young boys they get it out of the way it’s done, and then they’re friends five minutes later. And it clears the air and it’s better for them.

But they are told in school that they can’t do that. Now you see, zero tolerance on that kind of thing.
This is letting boys down. So, I feel the boys are very, very poorly let down by the system now. I feel that rambunctious boisterous boys, the system doesn’t know how to cope with them anymore.

NICK: Sport! As I’ve gotten older, I become a bigger proponent of sport for boys and girls. Not for the very obvious reason of moving your body, it’s good for your fitness, lifetime habits and all that stuff, which of course I believe in. But also because kids have to learn how to lose.
If we don’t learn how to lose, you are not being prepared for the real world. We’re trying to prepare productive citizens, who are mentally resilient and robust to what life is going to throw at you. And life is going to throw crap at you, no matter who you are unless you live in a bubble.

So, sport is brilliant because if kids are not getting given grades and if we’re kids are not interested in school, let’s say, so they don’t try. we’ve got to give them something to channel their energies at and to try out.

That’s not creating productive citizens and it’s not helping our young people. Men especially need to learn how to lose, because men are more competitive and men take it very, very personally. And if you’ve never lost, you need to build up those calluses in life, right? The most important thing in life is to build up calluses in order to build up resilience, you only become resilient by being in uncomfortable situations.

BEN: So obviously, for the developing boy or the young man, sport, competition winning and losing is very important. Does this continue to adulthood then? Do you see a role for kind of sport and competitiveness as supporting good mental health because obviously men’s mental health, is…

NICK: What I think that would be a great positive for the mental health of all men, is to always have something that challenges you; that could be a competitive sport, that we were just be talking about, it could just be as easily as doing something in the gym, it could be running, it can be a solo physical activity. It doesn’t even have to be a physical activity, but it has to be something that challenges you. Men are far more likely to be single-minded than women. I mean, I’m sure I’m going to offend somebody by saying this, but it’s just a fact.

Men are less balanced than women. If we know that we’re less balanced, we have to do things, we have to do two things; we have to balance ourselves out, which is why a great relationship, a great home relationship, for instance, and working on that, is so vitally important. Communicating with your children, not falling into the male trap of being an uncommunicative bastard. Being honest and open and frank and talking through problems. If you need to. Not indulging in them but talking them through. But at the same time, not throwing the baby out with the bathwater and forgetting that you need a challenge.