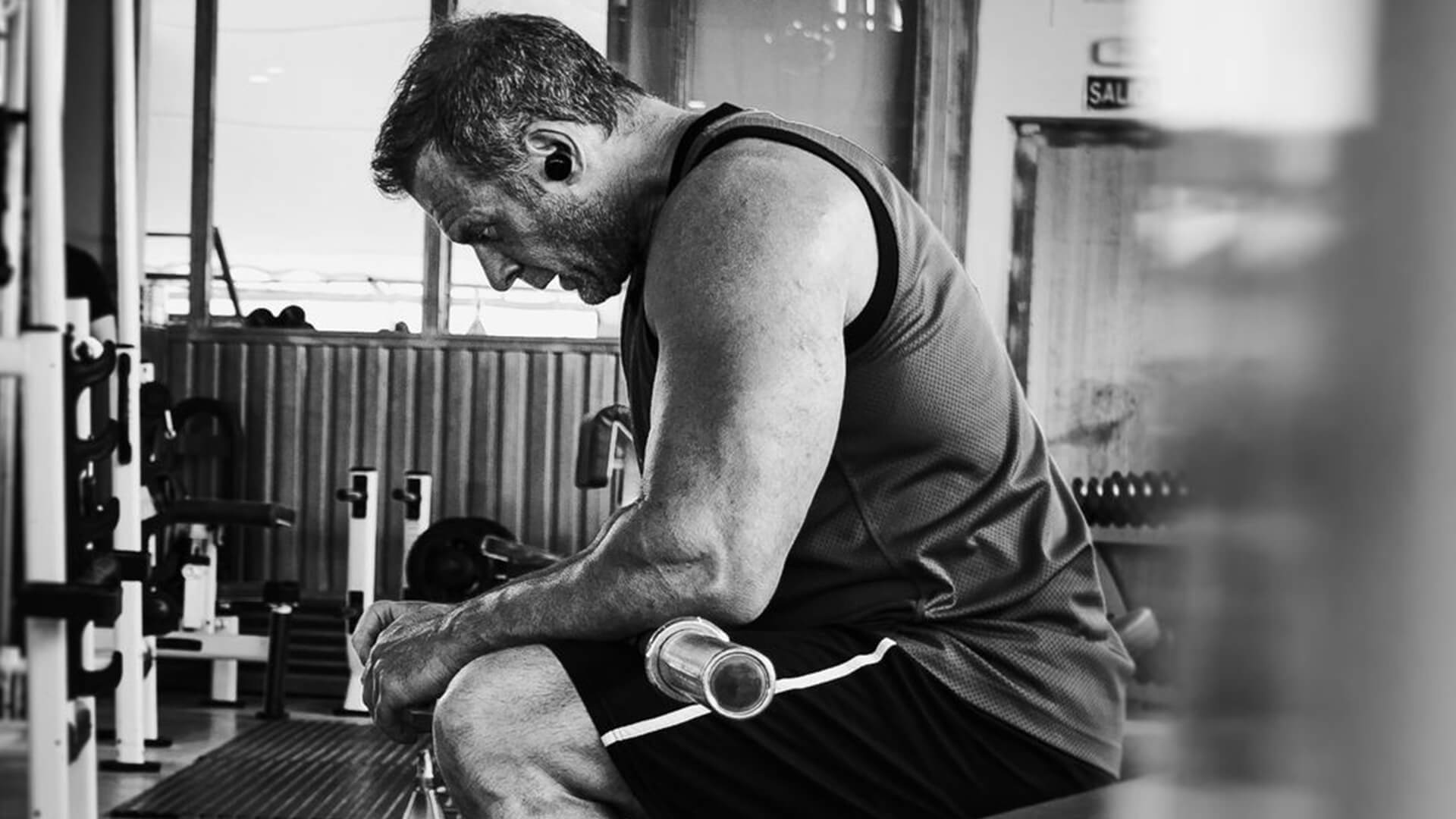 I have been training hard for over twenty years so unless I have had a layoff it takes a lot to get me sore, and yet last night I had interrupted a less than perfect sleep because my damn arm muscles were so sore they kept waking me up. I’d had two, yes two, particularly good arm workouts yesterday so I thought you might like it if I shared what I did to pulverise them so harshly and how twice a day arms training can work in ‘real life’.

The idea behind twice a day training for one body part is that the morning workout excites the high threshold motor units that are responsible for the development of strength and power and then you are ‘primed’ to do the higher rep, longer time under tension, hypertrophy work later in the day. It can take some getting used to from a work capacity perspective, but it is extremely effective as both a muscle mass and overall conditioning strategy. I personally find it very enjoyable from a mental perspective too as it requires two totally different training mindsets and I thrive on the variety of options it affords.

I get asked a lot for the specifics of my own workouts so just for a change I’ll let you into a blow by blow, set by set breakdown, but please do be aware that what works for me does so because I am me and this does not make it the automatic right thing for your own level of development and recovery ability. I am certainly not Mr. Olympia Jay Cutler, but at circa 11% body fat and 260-265lbs (at 6ft 3), I am not exactly a marathon runner either.

A2: Dips, to emphasise the triceps these were done with an upright upper body, head up, and using the narrower portion of the dipping bar.

I performed a total of about 8 sets of 5-6 reps on each movement, resting about 60 seconds between sets of A 1 and A2 exercises. Ideally, I’d have rested about 90 seconds as this would have been better for the fast twitch muscle fibres under the most stress, but as ever time was short and I only had 30 minutes to squeeze everything in.

On the preacher curls, I was able to warm up quite quickly and stuck with using 55kg for every set. The change in grips is an absolute killer (bodybuilders have trained like this, especially on leg movements, for eons, and Charles Poliquin fans will recognise that he calls this ‘omni-reps’), aimed to hit different areas of the respective bicep heads – the narrower sets are always significantly harder by the way. I reached failure only in the last couple of sets, just stopping short of five reps each time, which is the way I like it when in strength training mode. Stimulate not annihilate is the name of the game as you try to coax strength gains, not crowbar them through.

I used a more traditional pyramid protocol for the dips, starting lighter and working up to using an additional 87kg attached to a dipping belt. When your total dipping weight (extra load plus bodyweight) is nearing 210kg you really need to exercise caution and gradually build up to the top sets, so my dips were a series of 6 rep sets peaking with the two 2 top weight sets where I hit 4 reps on both sets.

Remember too that this was dipping for tricep development rather than the chest, for the latter, I personally can use a bit more weight as the different body alignment (leaning forward, chin on chest) recruits more of the larger pectoral muscles.

A1: Fat bar tricep pushdowns – I have a sometimes more than a niggling bit of elbow tendinitis and need to be very careful with all my tricep, and some of my pressing, movements. Pushdowns are not really a favourite tricep exercise of mine but they cause less aggravation than most and serve as something of a pre-exhaust before getting to the more challenging, and in my opinion more productive, exercises. I started very light, using a Watson fat bar attachment, with a set of 20 reps, pyramiding up until failure was hit on the last 2 sets at about the tenth rep. A good trick on this exercise is to really explode on the concentric part of the movement, no question you recruit more tricep muscle fibres this way. Too often I see an overly measured approach to this exercise, but that should come only on the negative.

A2: Incline dumbbell curls – started very light and squeezed the weight up and stretched the weight down. 12.5kg dumbbells for the first set, up to 17.5kg for the last 3 sets, with reps between 10-15.

A3: Tate presses – I call these Tate presses after American powerlifter Dave Tate. I don’t know if he invented them, it’s rather unlikely as there are zero genuinely new movements in strength training, but I learned about them from reading his workout log, so the credit is due. It’s a bit of a funny movement to describe – lie back on a 45 degree incline bench with your arms up (holding dumbells, I started with 17.5kg and worked up to 25kg) as if about to perform the negative component of an incline dumbbell press. Lower the dumbbells so that the outer flat plate on the same side of your thumbs is resting on your upper pecs, keep your elbows flared back almost in line with your ears, and then press them back up whilst keeping your elbows flared back. The trick here is to press them back up whilst at the same time keeping the 2 dumbbells close together as opposed to travelling further away from your body. I asked Grace to snap a couple of photos of me doing this as I warmed up so I hope that they better illustrate the movement.

The start of the movement, it is always nice to pause for a 1-2 second count to totally eliminate momentum.

The focus at the top of the movement should be on squeezing the triceps as hard as possible – you cannot do this properly unless the arms are in the position demonstrated in this photo.

A4: Reverse grip, fat bar ez curls- I attached a pair of fat grips to a regular EZ bar in order to make this a bit more forearm dominant. Because of the thick grip, my weight was pretty limited, and I stuck with using a 10kg plate either side. The first set or two were 20 rep affairs, but by the end, I was struggling to eke out a good 10!

I performed five sets of all these movements, stopping only to sip a little water and down a few BCAAs, and must have completed 20 sets in a little over 20 minutes. They are not massively taxing exercises so going at a good pace is very possible, as well as preferable given that the goal in the afternoons session was to go for the biggest pump possible, using movements that allowed for plenty of stretching and squeezing (hence the choice of the last two ‘finisher” exercises below). When training like this weight is entirely secondary, good form is paramount, and the real aim is to feel every muscle fibre being pushed, pulled, and pumped to the limit.

I finished the workout off with the two movements above. Just three sets of each, going back and forth, holding the very deep stretch on the French presses for a second or two at the bottom of the movement, and holding the peak contraction on the spider curls. I don’t recall the weight I used as I really didn’t care by this stage and was going purely by feel. It would have been something light and entirely unimpressive, though.

My final few points that really relate to twice a day training are:

You need to condition yourself to such extreme volume. Jumping into twice a day training, especially the volume that I have set out today, would be massive overkill if you have only ever trained 3/4 days a week on an upper / lower body split for example.

Pre, during, and post workout nutrition is crucially important at all times, but even more so given the demands imposed by twice a day training. Prior to the strength session, I used alpha gpc, fast brain, and yang rala, and before the afternoon session 4 javastim and some sinew plex. As I have noted already I wolfed down BCAAs during both workouts, getting through about 40 caps of Poliquin BCAAs each time. And after each workout I took 50 grams of whey, 100 grams of carbs from vitargo, 5 grams of creatine, and 10 grams of glutamine, all washed down with 3 fenuplex, 3 glucose disposal, and a few Yin rala (the latter after the second workout only).

If you persist with any type of twice a day training, be it twice a day for the arms, or for the entire body (I typically recommend doing twice a day training for only a few body parts at any one time), then have a good soft tissue therapist at hand. I am very lucky in that we have 2 of London’s best ART practitioners at my gym, plus Grace Chan to give me regular painful sports massages. I would be a broken man without their fantastic help and support.

And finally, if you think I can train like this all the time you are crazy! Knowing how and when to back off is a real skill that takes time and a tonne of training experience to learn.

If you like this post I’m always extremely appreciative of LIKES and SHARES via the social media. And if you don’t live near any of our gym locations and want to work with our team, maybe you should check out our very popular, online coaching service, it is designed to coach and teach you all the fundamentals, as well as inside tricks, tweaks, and tips, that I try to get across in my blogs.