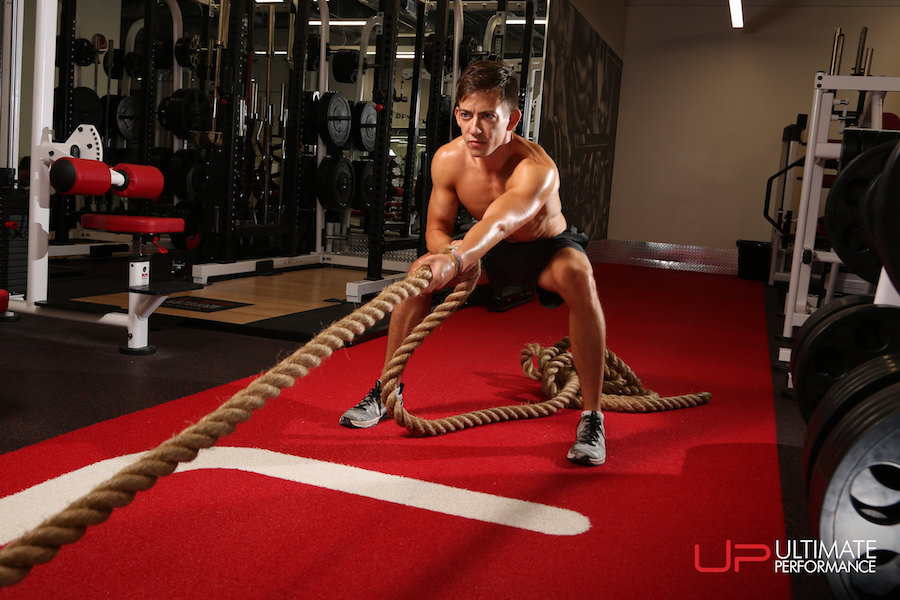 Kevin, who starred as Artie Abrams in comedy-drama Glee, had always trained with personal trainers, but had never achieved the results he really wanted.

However, long-term digestive problems had completely killed off his motivation for working out, and bad diet habits had left him with a ‘skinny fat’ body.

Kevin was turning 30 and wanted to make big changes to his body, but never felt confident or comfortable training in the gym.

Starting a transformation at U.P. Los Angeles changed all that.

Within a matter of weeks, Kevin had lost 7lbs of fat and gained 5lbs of lean muscle to make a truly incredible transformation.

Not only that, but Kevin has learned the skills to train efficiently and effectively in the gym himself to maintain his physique.

Here Kevin explains the training program he followed to get his new body and why it was so effective. He also talks about why working with the world’s leading personal training business was so different than anything else he has experienced. 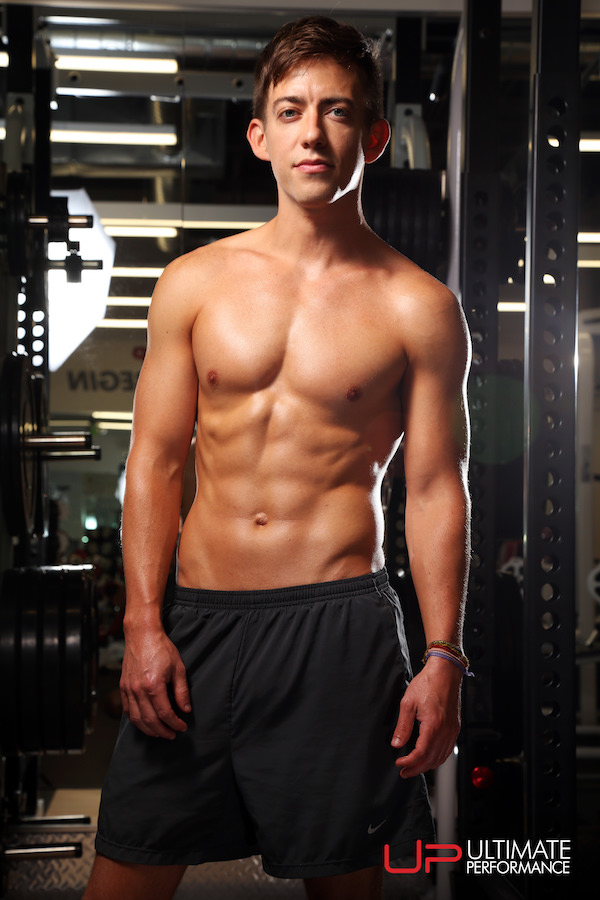 GET REAL BODY TRANSFORMATION RESULTS LIKE KEVIN WITH YOUR OWN PERSONAL TRAINING PLAN.

What goals did you have before starting your transformation with U.P.?

Right from the very beginning, Eddie was like ‘tell me your goals’. Send me some pictures of physiques that you would like to look like. I had no idea.

I sent these pictures almost laughing and thinking ‘I will never look like that!’ Now, 12 weeks later, I look at my pictures and think ‘Alright! That’s like sort of the same thing!’ They are realistic goals! 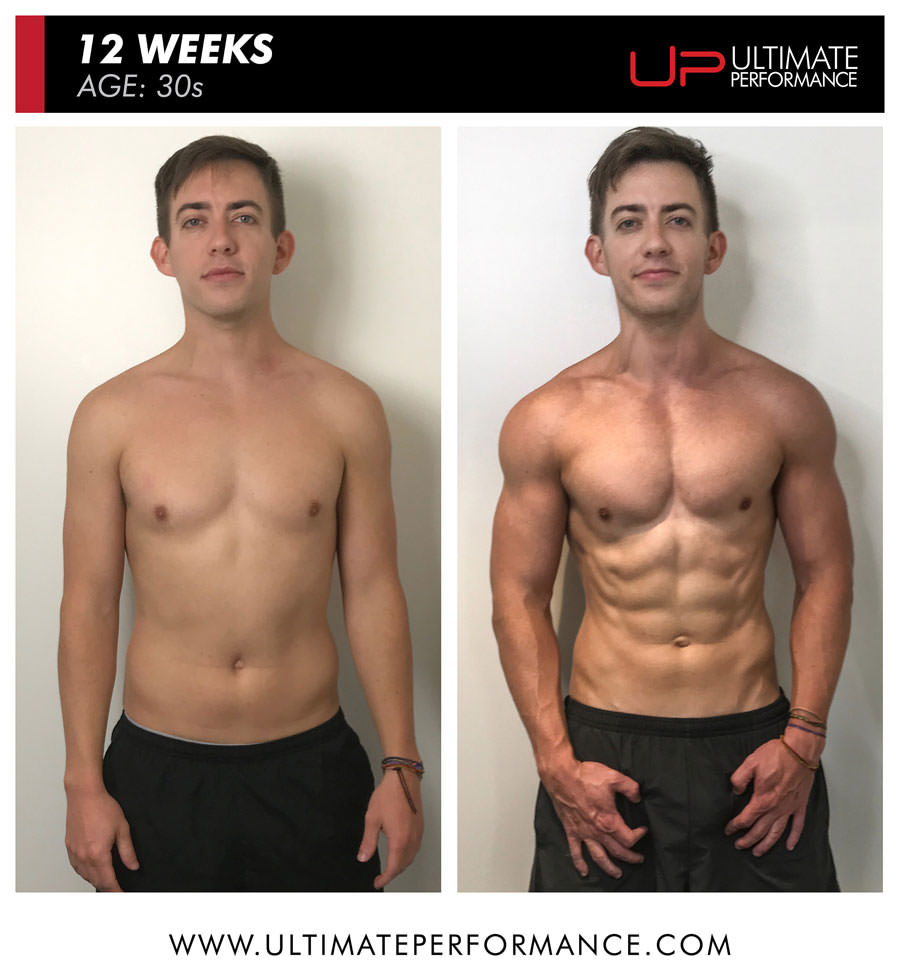 Kevin explains how the atmosphere and environment at U.P. all feed into the life-changing results.

The first thing I learned is that they completely gear your workouts to you. So, every single person’s routine is different.

For me, we started by doing about four to five weeks of a two-day rotation, all full-body workouts. While only a few of the exercises were new to me, the attention to detail and technique was completely new.

Eddie was also getting me used to pushing myself to the point of failure, conditioning me to be comfortable with that, knowing that I could push myself harder than I thought I could and when I couldn’t, he would be there to quite literally take the weight from me.

I realized over those first few weeks that the little changes and corrections during every single rep were what was really making the difference.

The precision in the training, plus the nutritional guidance, made it all feel very scientific and they all clearly knew what they were talking about.

So it made it all very exciting because I knew if I did what they said, I’d somehow end up like a ‘before and after’ picture! 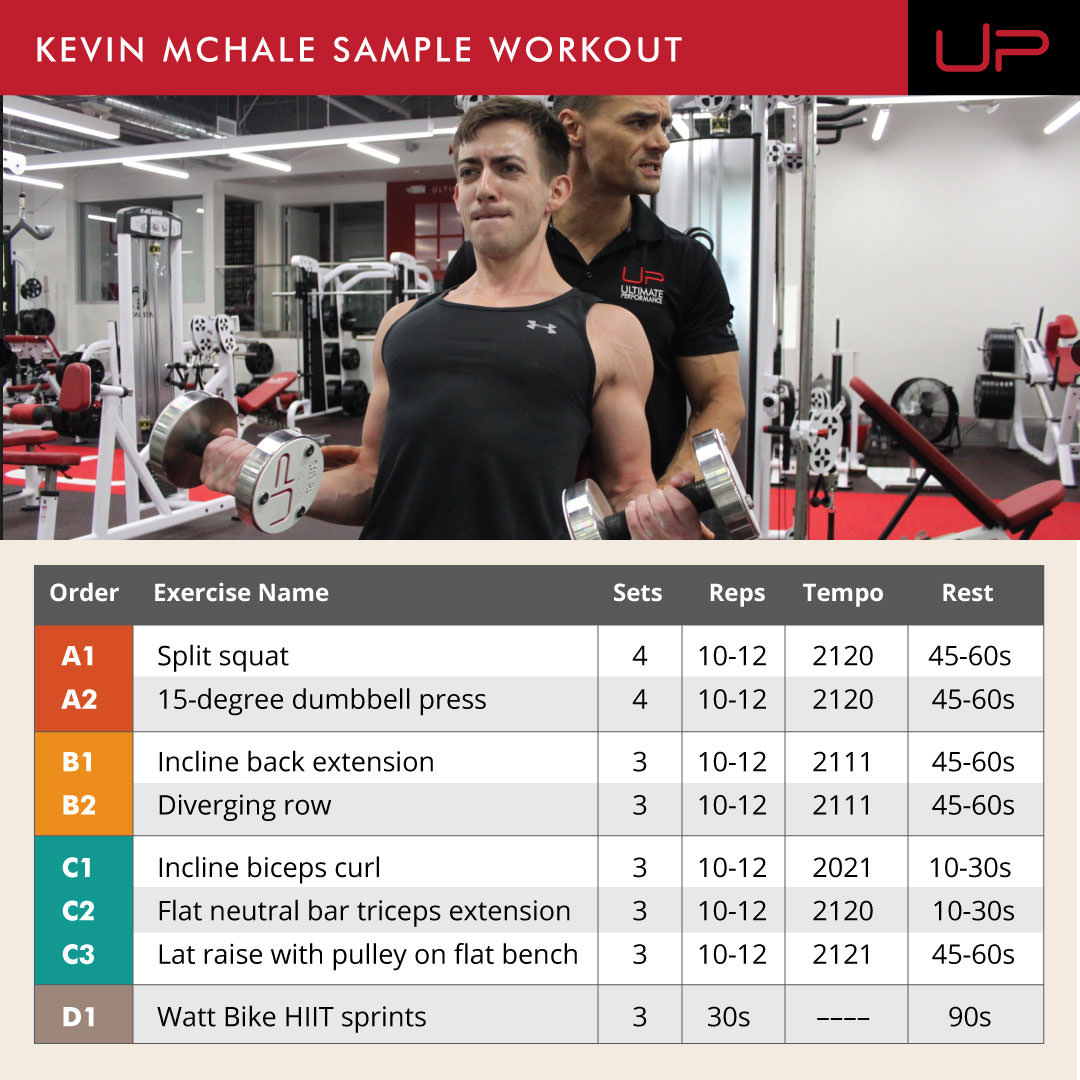 How quickly did you start noticing results and how did it feel?

Once I got past the first few weeks, I’d dropped about 3% body fat, it might have been even more than that!

When you can see numbers and tangible things like that you think ‘oh my god this is working!’

It’s rewarding, and it serves the purpose of thinking ‘I need to be doing this.’

I would say that week 3 was the first big marker for me and made me think ‘they know what they are doing.’

I still couldn’t imagine myself how I would be after 12 weeks. I was already happy with this after three weeks, so keep going! 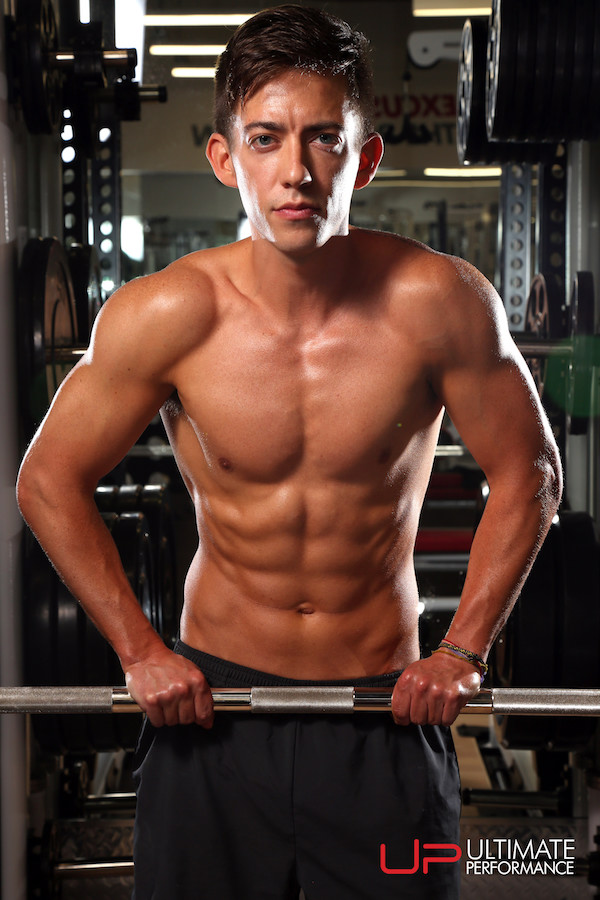 READ MORE ABOUT THE RESULTS THAT KEVIN WAS ABLE TO ACHIEVE AT ULTIMATE PERFORMANCE HERE.

What overall results have you achieved?

I started at 16% body fat and I’m now below 8%. I lost 7lbs of fat and gained 5lbs of muscle. They may not sound that drastic, but for someone as small as me, for me looking in the mirror it’s pretty drastic.

My whole body composition is completely different. The shape of my body is 100% different. 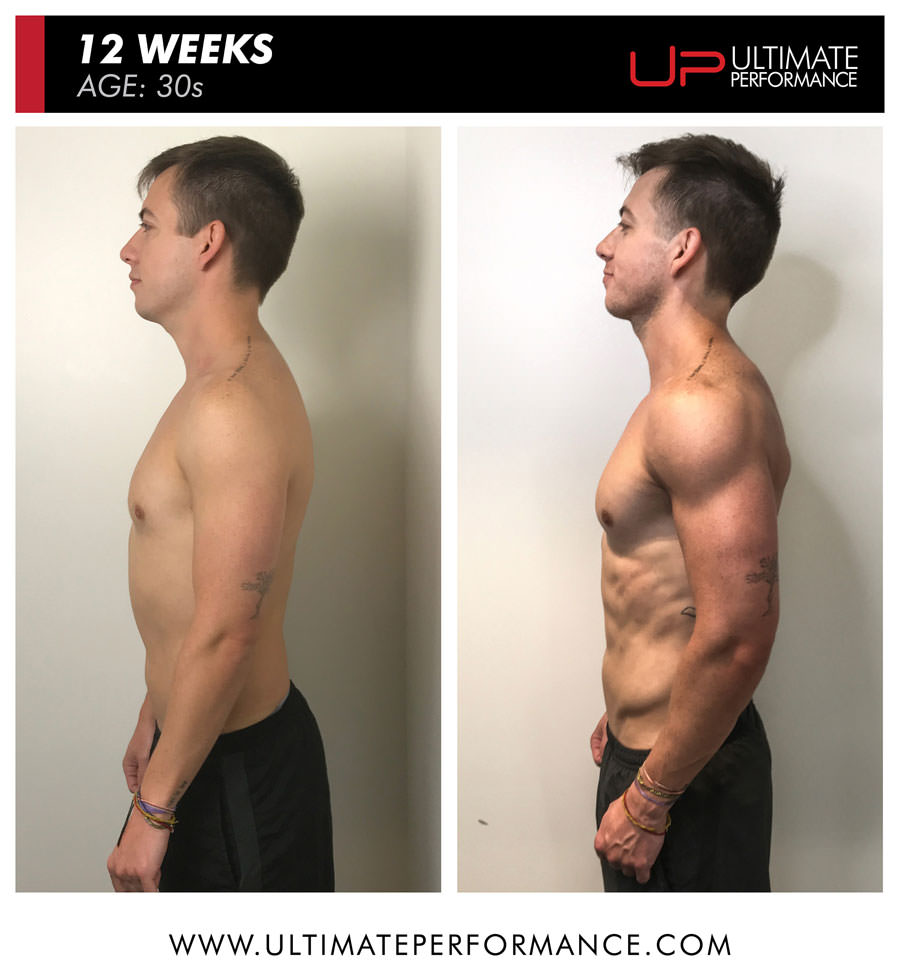 START A TRAINING AND NUTRITION PLAN THAT DELIVERS MAXIMUM RESULTS IN MINIMUM TIME.

What was it like first walking into the gym?

When you walk into the gym, it can be daunting. But when you know that you can fully trust the person who is training you, and you know that you’re doing to maximise your results in that hour that you’re with them, then you can shut your brain off and just do whatever they say to the best of your ability.

When I know that someone actually knows what they’re doing, and I don’t, then that weight is lifted off my shoulders.

How did you used to feel going into a gym and how has that changed since training with U.P?

I hated going into gyms. I’d walk into a gym and think ‘I don’t really know what I’m doing, what exercises complement each other, or what I should be eating after or before the workout’.

When you don’t have any clear direction or guidance, I would do exercises but never know if they were working, or if I was doing them exactly correctly.

It’s a different experience when you have someone there to push you as hard as you can go.

But I feel better knowing I’m doing the right things and doing the things that are going to be best for my body.

It’s actually been good that I’ve been away and had to go to the gym on my own during this thing. I see now that this will be sustainable afterwards.

That was a big reassurance that I’m learning these skills that I’m going to hold on to for a lifetime.

Walking into a gym now is a completely different thing. I feel good and confident going to the gym now.

What was the atmosphere like in the gym at U.P.?

The gym at U.P. is great. You know that everyone is doing what you’re doing. Everyone is here, and you see the same people, and everyone is committed to changing their lives and I think that’s super encouraging.

All the trainers are encouraging everyone all the time. That’s super nice to see. Everyone is super-focused.

I thought it was going to be super-intimidating because the results U.P. get look like that, but it’s not.

I’ve never had fun in a gym before. Everyone’s yelling at you but encouraging you in a fun way where it actually now feels like I’m walking into a friend group.

It makes those days when you don’t feel like training but you get five minutes in and you’re like ‘this is actually fun! I’m fine. I’m happy to be here!’ 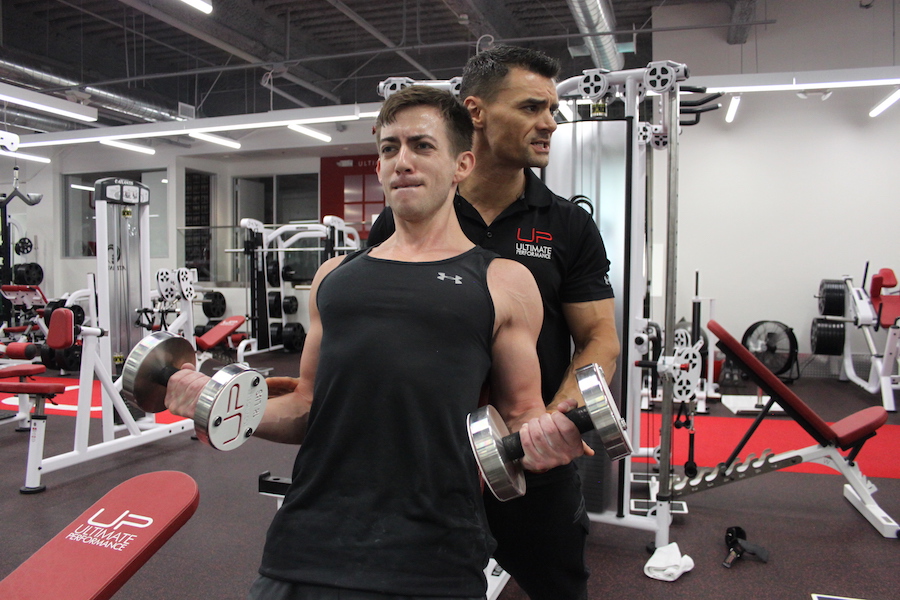 What has the relationship with your trainer Eddie been like and how much has he supported you?

I had to unexpectedly go back home to Texas for two weeks in the middle of this and he would check in with me every day.

He would be like ‘how’s the food? How’s the training?’ It’s staying on you, but not in a militant or annoying way at all. He’s just ensuring the progress we have made is not going to be lost when I’m away.

He has been super adaptable. I tell him when I slip up. It’s that level of trust where there’s no point in hiding anything.

I had a stomach bug in that time, but they deal with it. They’re not going to push you beyond your means.

Eddie can seem like an intimidating person at first, because he’s big and muscular, but he’s not really ‘Evil Eddie’. He’s a big old softie.

But he knows what he’s doing. He is the man! You know you’re in the best hands around and everything is going to be fine. 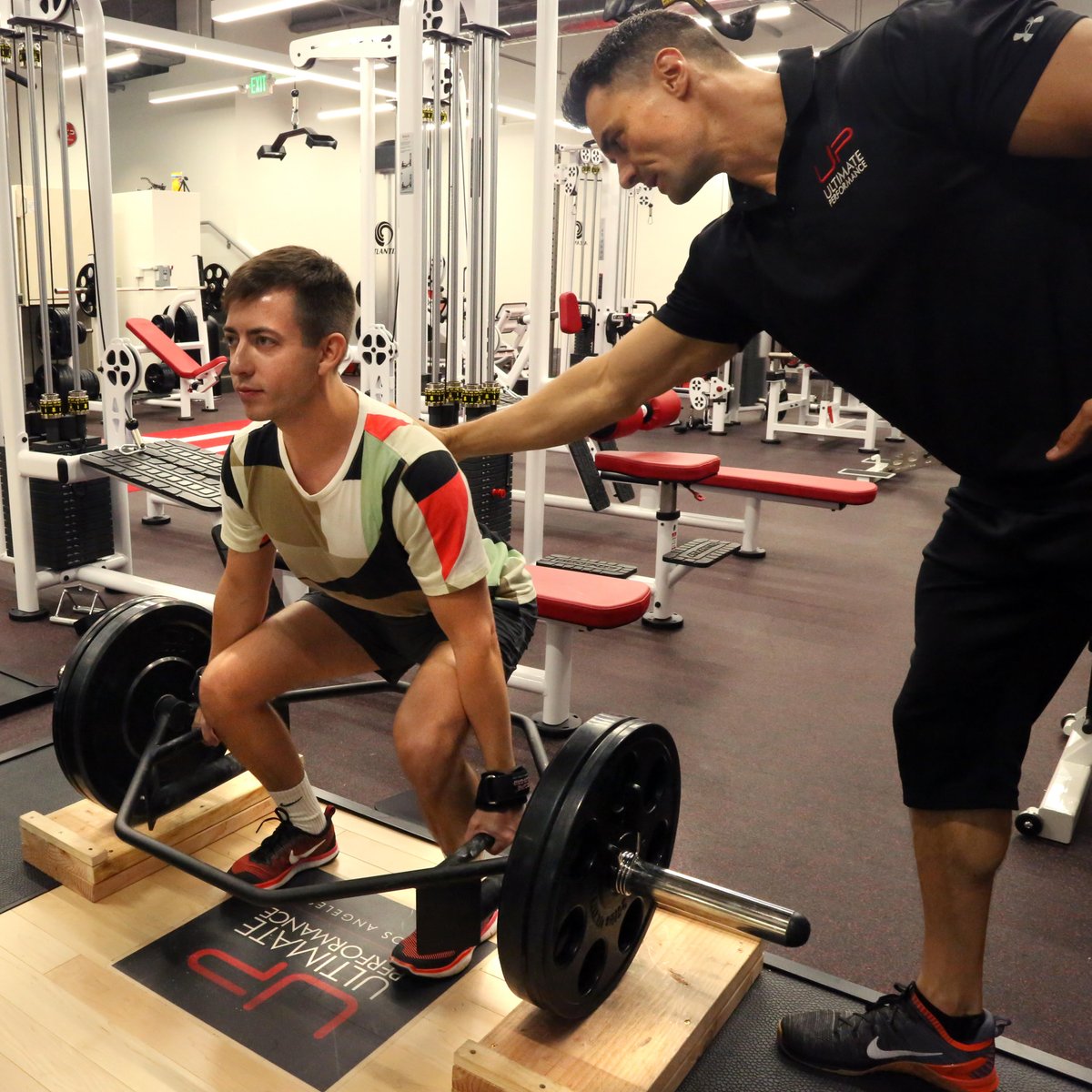 Kevin talks about how Ultimate Performance’s ‘maximum results, minimum time’ mantra will be a game-changer in Los Angeles.

As a newcomer to the LA fitness scene, what impact do you think U.P. will have?

I think LA is oversaturated with gyms. So, the only way to cut through that is to be different.

I think U.P. is completely different. The difference is that U.P. is much more focused and precise.

Those tangible results will cut through for people In LA. Because in LA, people care about fitness and exercise, but there’s a lot of nonsense and fake stuff where they’re selling you a lot of fitness things.

But it’s just making you feel good, which is nice, but not giving you the results which you had the intention of getting.

You come here, and you get all of that.

I work in the entertainment business, and I already tell people if they need to train for a film or TV project they should come here, because it works and it’s so much more expedited because it’s so precise.

I keep telling people it’s more like working with scientists here because the diet and training are so precise per person.

That doesn’t happen anywhere else.

START YOUR OWN BODY TRANSFORMATION PROGRAM TODAY WITH U.P.

OR GET RESULTS ANYWHERE IN THE WORLD WITH A BESPOKE ONLINE PERSONAL TRAINING PLAN.