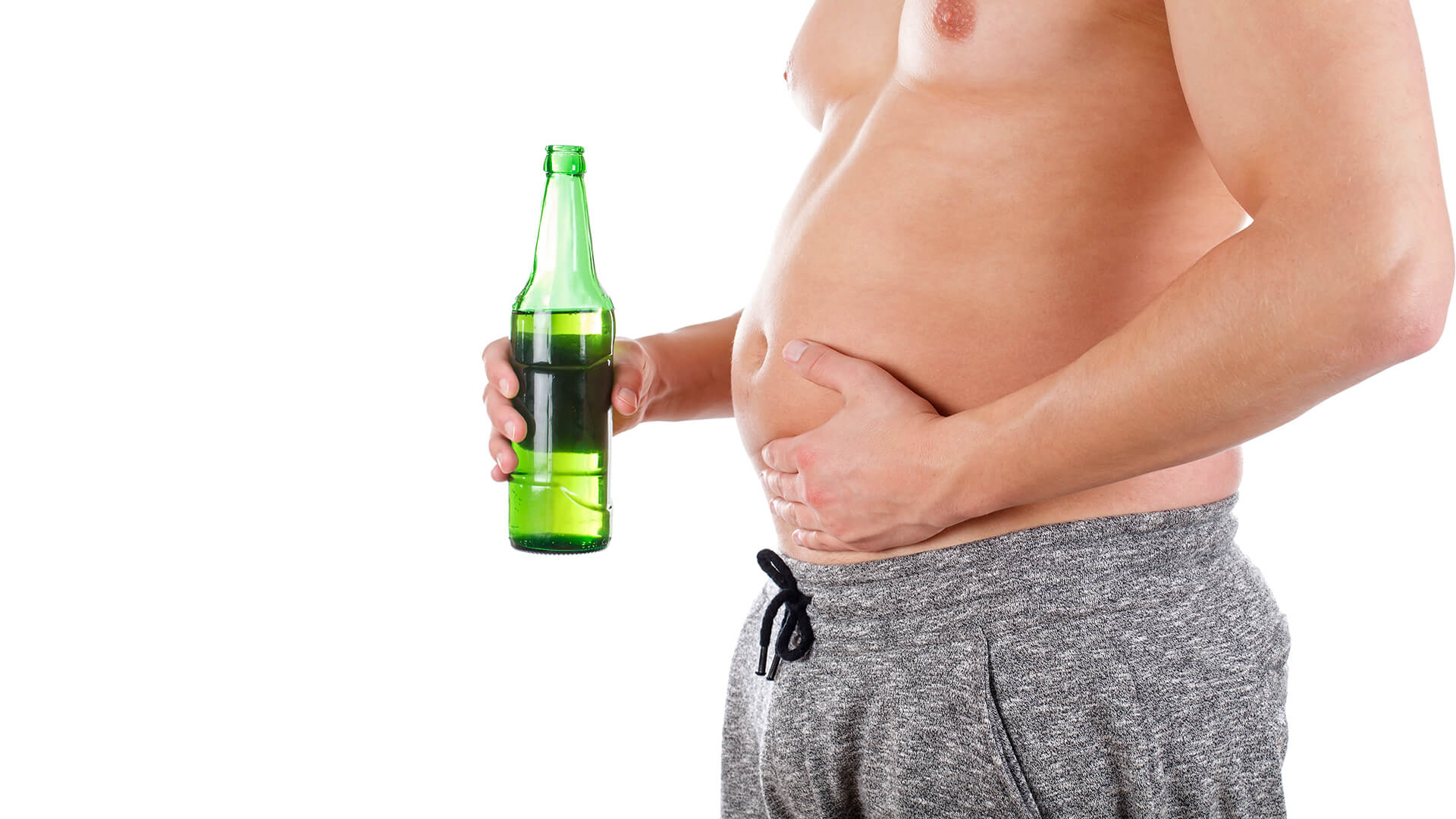 The male beer belly can truly be a sight to behold.

Ponderously swinging before its owner (who has lost sight of his belt buckle and other things) many years ago, it isn’t just a superficial cosmetic disaster, it is also a health and longevity nightmare.

Rather they are caused by an excess accumulation of visceral fat – that is fat that sits under the abdominal muscles in between the organs.

Large quantities of this type of fat are associated with massively high levels of insulin resistance and all the cardiovascular and diabetic problems that go with such a condition.

Unfortunately for me, this is also a problem associated particularly with higher levels of testosterone, hence the increased male risk of heart attacks.

However, the good news is that visceral fat has an extremely good blood supply and is therefore metabolised for energy rather efficiently.

This means that a halfway decent diet and exercise programme should get rid of it a reasonable pace.

The following is part of an interview conducted with Nick Mitchell by Kevin Braddock of the national newspaper The Daily Mail. He discusses the dreaded beer belly and some of its causes and solutions.

Q: It is true that the beer belly is actually created by binging on beer? What else can cause one?

Nick Mitchell: (First of all you need to make it clear that a beer belly is a classic pot/pregnant belly, not necessarily a stomach with a thick layer of fat hiding any abdominal muscles).

Yes binging on beer can cause a beer belly – always look for the most logical answer first when dealing with the human body. Several pints of beer drunk frequently are going to swell up and distend the stomach regardless of an individual’s body fat levels. Some men regularly imbibe 6 pints plus in one evening – the pressure of retaining pints of high calorie containing fluid are going to swell even the leanest person’s belly. However, there are further reasons why beer can cause a “beer belly” that we often have to address with our personal training clients. The classic beer belly is also commonly caused by high levels of visceral fat. Fat under the skin, the “cosmetic” fat we are all aware of is subcutaneous fat, but visceral fat is internal fat, and can be thought of as “gut fat”. It is actually underneath your abdominal muscles surrounding your organs and can cause the look that we refer to as central obesity. All people with high levels of visceral fat are also VERY insulin resistant and need to avoid sugary, processed and starchy foods wherever they can.

Q: Why do men store fat around the waistline?

Classic male fat pattern distribution is to store fat around the belly button area. The reasons for this are due to very complex hormonal interactions that are likely far beyond the remit of this article. The potted version of why men are more susceptible to umbilicus (belly button) fat storage is due to the increased sensitivity of the male to the hormone cortisol. Cortisol causes excess calories to be stored as fat around the belly button. Note that by reducing stress (and therefore cortisol) I often get clients a lot leaner – it can be as simple as losing fat by doing less. The beer belly look is due to visceral fat, and visceral fat has been linked to elevated androgen (for simplicity’s sake androgen = testosterone) levels. For example, women with PCOS (polycystic ovary syndrome) often have neer/pot bellies due to higher testosterone levels.

Q: What are the best ways for men to tailor their diets to get rid of a beer belly?

Nick Mitchell: Stop drinking beer! If they don’t drink beer then they need to lose the visceral fat. Given that visceral fat is a huge indication of severe insulin resistance then the best thing to do drop the beer belly is to manage insulin levels by the educated limitation of carbohydrates in the diet and most notably the ditching of processed, and/or sugary foods. This basically means limited or no breads/rices/pastas, no microwaved meals, tight restrictions on anything that comes in a box (including so called healthy cereals that will raise and drop blood sugar levels terribly via their overstimulation of insulin release). I really don’t need to talk about sweets and cakes do I?

Q: How long would it take to get rid of a beer belly through nutrition? What should be avoided?

Nick Mitchell: This naturally depends upon the severity of the problem, but for a small beer belly (as opposed to a fat umbilicus area) it can take as little as 2 weeks to drop the gut through good nutrition (and perhaps herbal insulin modulators – see below) alone. Visceral fat actually has an excellent blood supply in comparison to subcutaneous fat and therefore it’s more metabolically active and easier to mobilise quickly.

Q: Is beer actually all that bad for a diet, and a beer belly in particular?

Nick Mitchell: Beer is terrible for anyone seeking to lose body fat. A small glass of red wine on an evening is very good as we know (especially due to the high content of the only truly anti ageing compound ever isolated by man, resveratrol, in Merlot and Pinot Noir) but beer is bad due to its high count of totally empty (nutritionally valueless) calories and it estrogenic effects. This latter point can’t be underestimated – hops are HIGHLY estrogenic and as such are the prime causers on many men not just for beer bellies but also man boobs.

Nick Mitchell: No – insulin sensitivity (the ability of the body to produce sufficient insulin to draw sugar from the blood without overdoing it and dumping too much insulin and therefore too much “sugar” – glucose – into your system at one time) is increased as the day goes on, so eating SENSIBLE starches at night is far better for dieting than eating the equivalent foods in the morning. Think about the intelligence of the human body for a second, carbohydrates such as starches increase the neuro transmitter serotonin (one of the side effects of excessively low carb diets is the mental edginess suffered by some dieters) – serotonin makes you feel good and helps you to sleep.

So when would it better for the body to consume carbohydrates? In the evening. I give most of my clients meat and nuts for breakfast and they buzz throughout the day (why is another story and due to increased levels of serotonin’s sister neuro transmitter, dopamine, which helps us to feel sharp and alert), and then help them sleep by feeding them serotonin inducing foods such as rice and beans at night. Have you ever stopped to wonder why rice and beans is the food of choice of the most laid back cultures in the world…this is not a coincidence.

Q: What about Food combining or the Atkins Diet?

Nick Mitchell: I see little logic to food combining unless the focus is on nutrient timing and revolves around taking advantage of the body’s differing levels of insulin sensitivity such after intense exercise or later at night. The Atkins Diet is great for someone wanting to drop water weight very quickly or for those who react so badly to carbohydrates that they may as well be called devil dust. That’s 5-10% of the population only. Otherwise Atkins is far too extreme and not a long term solution.

Q: What are the wrong ways to get rid of a beer belly: crunches etc

Nick Mitchell: Crunches will work the abdominals but are not the best way to burn the visceral fat of a beer belly. The best way is to activities that make you hot, sweaty and pant a lot. I prefer the gym, but others may have better ideas.

Q: What are the right ways to get rid of a beer belly, in terms of training?

Nick Mitchell: The single best way is to exercise in such a way as to create a massive metabolic shift that promotes a cascade of fat burning (and muscle building) hormones. Total body weight training in a specific manner with minimal rest and appropriate load (70-80% of what would be someone’s 1 repetition maximum weight) is far and away the fastest and most effective way to drop fat.

Nick Mitchell: Gadgets no, supplements and spot reduction (via diet, exercise and supplements) can work yes. However this is a very complicated subject – at U.P. we structure personalised training and nutrition programs that really do work for reducing localised fat stores as it targets the hormones that cause individual’s to store disproportionate fat levels in different areas of their body – eg a fat belly, fat thighs, love handles etc. We have our own in-house app called Transform that allows both the client and the trainer to accurately track meaningful body data in a way that allows you to determine real world changes in bodyfat and muscle mass.

Q: Does posture play a role in the beer belly?

Nick Mitchell: Of course it does. Many people have anterior pelvic tilt – meaning their arses stick out, their lower backs round, and their (usually weak) abdominals “stick out”. However, poor posture alone will never give one a beer belly.