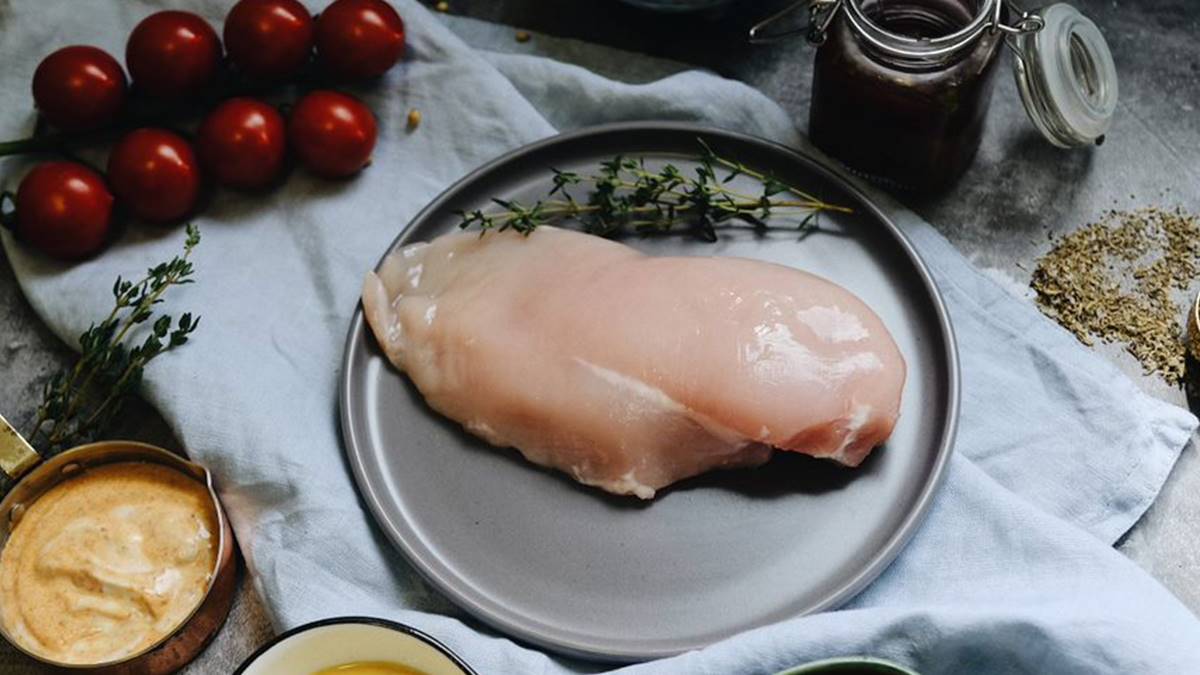 Is Going Paleo Really the Best Diet for You? Diets Reviewed

Unless you’ve been living under a rock for the last 30 years, you’ll almost certainly have heard of the paleo diet.

Touted by proponents as being the answer to everything from diabetes, high blood pressure to numerous cancers, there’s no doubt that this ultra-unprocessed, high-quality diet may have some health benefits[1]. However, its restrictive nature has led people to question whether the pros outweigh the cons. Read on to learn everything you need to know about going paleo and weigh up whether it’s the right approach for you.

What is the paleo diet?

The paleo diet is a nutritional strategy that excludes nearly all forms of processed foods and instead only focuses on those that proponents claim to have been eaten by palaeolithic man, approximately 2.5 million to 10,000 years ago, before early farming practices emerged. This development changed human diets and resulted in the introduction of dairy, grains, and legumes.

It has been supposed that these alterations occurred too recently on an evolutionary time scale for the human genome to adjust[2]. These observations resulted in the creation of the discordance hypothesis, which states that the modern rise in obesity, disease and malnutrition is caused by changes in farming practices and industrial Western food manufacturing and consumptive patterns.[3]

You may have also heard of the paleo diet referred to as the palaeolithic, stone-age, hunter-gatherer, or caveman diet. Typically, this dietary approach includes anything that could be obtained through hunting and gathering. The table below provides a summary of what you can and cannot eat on the paleo diet.[4] 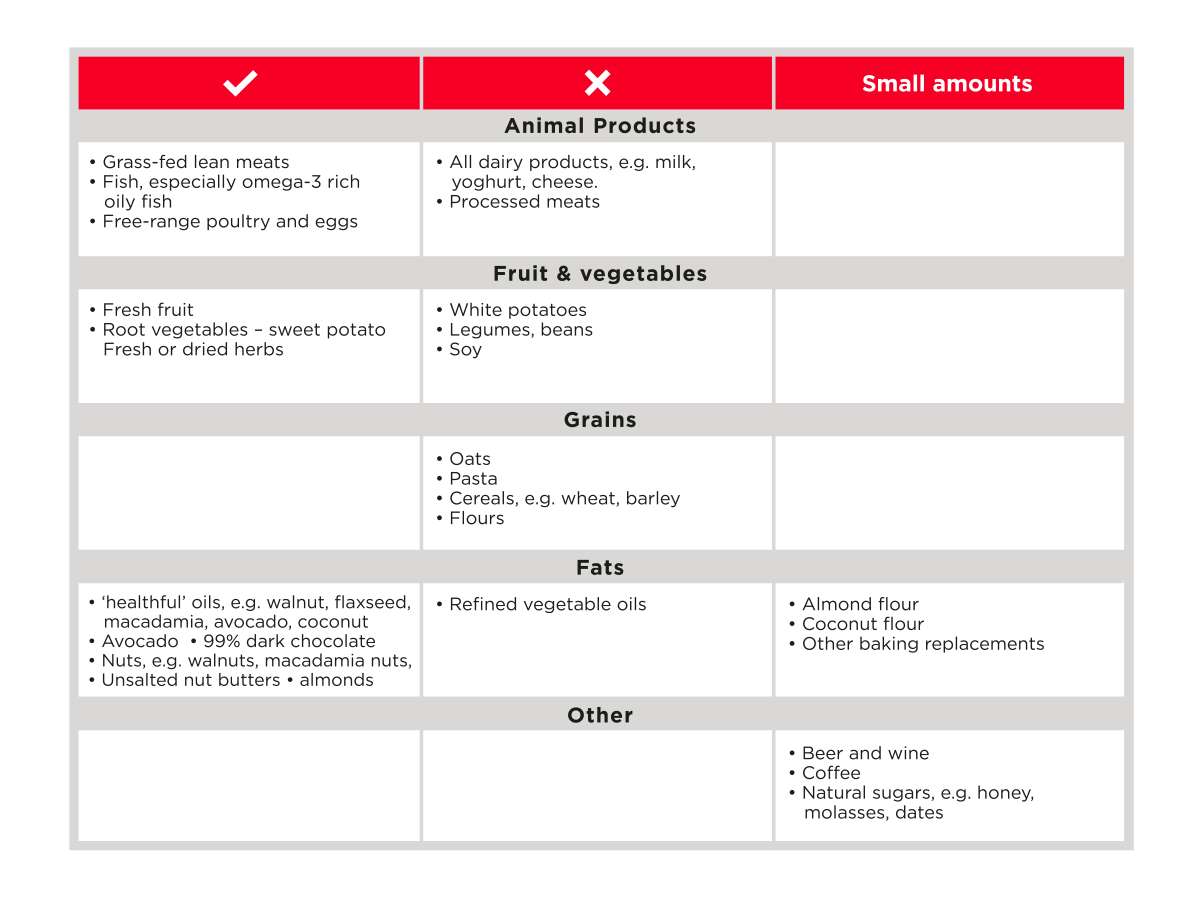 Proponents of the paleo diet believe that it is superior for improving multiple health markers, including type II diabetes, some forms of cancer and cardiovascular disease (CVD), but does this argument hold water?

The paleo diet is high in fibrous vegetables and omega-3 rich food sources such as oily fish. Such foods have been shown to be highly beneficial in improving triglyceride profiles and reducing the risk of atherosclerosis.[5],[6] Likewise, trans fats are not permitted in the paleo diet, which have been shown to increase total cholesterol and LDL levels.[7]

2. It could help improve the risk of high blood pressure

The paleo diet is rich in polyphenols, an antioxidant found in berries, nuts and some vegetables. Some studies show that high intakes of these micronutrients may decrease the risk of hypertension by up to 10%.[8]

A wealth of evidence indicates that high consumption of ultra-processed foods increases the risk of non-communicable diseases, such as CVD, stroke, depression and all-cause mortality.[9]

4. It could assist in weight loss and management

Because the paleo diet is relatively low in carbohydrates and high in healthy fats and fibre, it may help to increase insulin sensitivity. Alongside its benefits for weight loss, paleo could improve outcomes for type 2 diabetes and other conditions associated with metabolic syndrome conditions.[12] 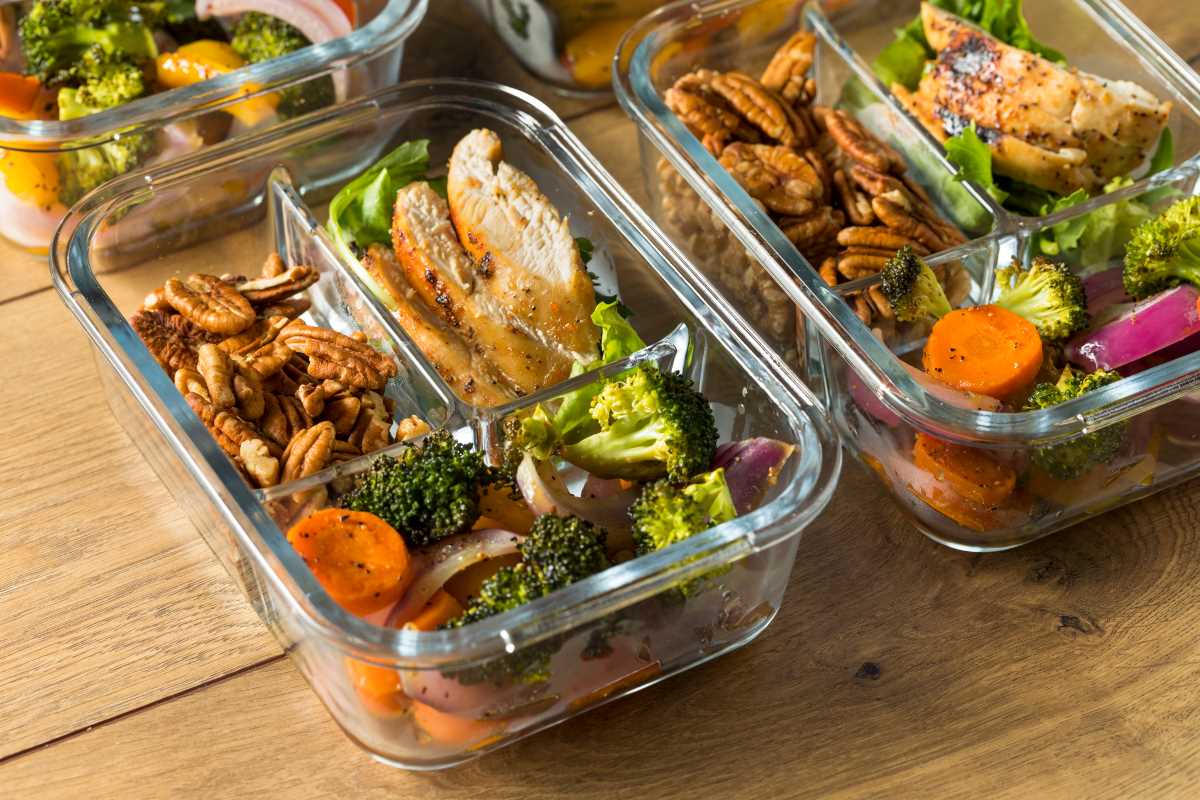 The paleo diet can help with weight management and gives a low-carb approach that can improve insulin sensitivity.

While paleo undoubtedly has several benefits, due to its inherent restrictions, it has several key downsides that mean it may not live up to the hype.

There’s very little evidence that beans, pulses, potatoes or grains like oats are damaging to health; quite the reverse is true. For example, potatoes are an excellent source of potassium, a key electrolyte we require for producing muscle tension[13].

Likewise, oats are high in soluble fibre, which is highly beneficial for gut health, managing triglyceride levels and improving immune function[14]. You only need to look at the lifestyles of those most at risk for the diseases that paleo is supposed to relieve (i.e. high stress, poor sleep, high intakes of processed foods) to see that these foods probably aren’t the root of their health problems.

2. The evidence shows that paleo is not inherently ‘better’ for health

While elements of the paleo diet may have health benefits, research indicates that paleo is not superior to other healthy diets in terms of its effects on glucose management and insulin homeostasis[15].

3. Eating a paleo diet will not result in weight loss alone without caloric restriction

Paleo may benefit weight management, but this is primarily through its ability to improve satiety and hunger signalling. Systematic reviews have concluded that increased intakes of dietary fibre could lower serum leptin levels in obese individuals[16]. This effect may make it easier to create a calorie deficit, but it’s important to note that the primary determinant of weight gain or loss is energy balance.

Ancient humans endured periods of decreased food availability and famine that restricted their weight and growth[17]. But when food availability is unrestricted, it’s just as possible (and potentially easy) to gain weight overeating nut butter or avocado as more processed sources. 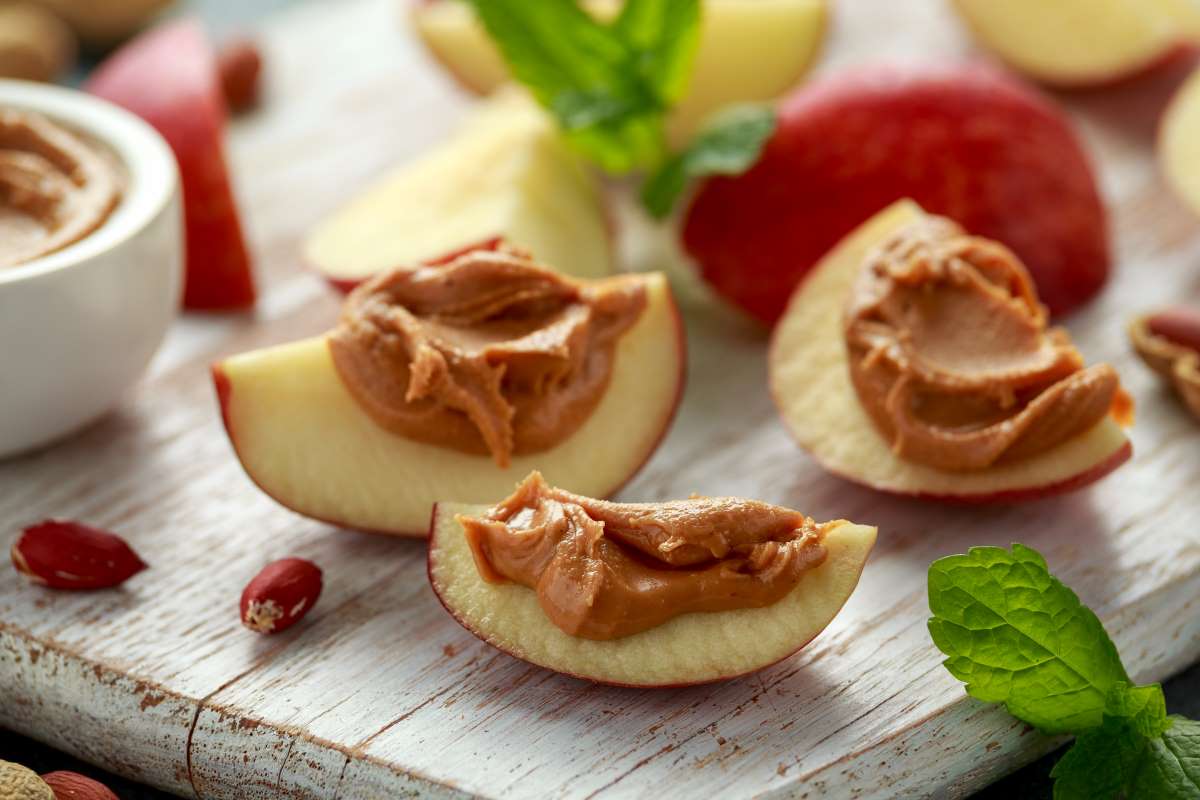 The paleo diet isn’t a ‘magic’ cure-all for obesity – you can still overeat high-calorie, energy-dense paleo foods and gain weight.

4. Going paleo will not improve health without overall lifestyle change

One of the primary differences between prehistoric man and today’s humans is the vast differences in physical activity[18]. Likewise, we know that sleep and stress also play a significant role in modulating several elements of human physiology, including blood pressure, insulin sensitivity, appetite and numerous others[19]. Focusing on diet at the expense of overall lifestyle change may not make paleo as beneficial as its proponents claim.

Numerous studies have found that weight loss rather than specific dietary make-up is key for reducing the risk of diseases such as diabetes, high blood pressure and poor blood lipid profiles. Therefore the best diet is whatever helps you achieve this consistently, and the specific macronutrient split or timing of foods is negligible[20],[21],[22].

So, if eating a bowl of porridge in the morning, having small amounts of dairy, or even the odd glass of wine helps you achieve that, there’s no reason why they can’t form part of a healthy, balanced diet.

6. It’s inaccessible to the majority and increases food inequalities

Figures from the World Health Organisation (2016) indicate that, worldwide, there are around 1.9 billion adults who are overweight, with 650 million of those being obese (BMI ≥30 kg/m²)[23]. However, cost analyses have indicated that the paleo diet is around 10% more expensive than an essential diet of similar nutritional value[24].

Part of the problem with the paleo approach is that it claims to resolve some of the world’s current biggest problems yet fails to account for the fact that socio-economic inequalities often determine food choices[25],[26]. As a result, it’s simply not a realistic large-scale solution.

7. Going paleo could increase the risk of deficiencies

Short-term interventions have shown that calcium deficiency is a significant risk in the paleo diet, as the average calcium intake of the paleo diet is around half of that of the current recommended guidelines[27]. Without supplementation or increasing intake of calcium-rich fish or vegetables, those following a paleo diet could be at increased risk of osteoporosis[28]. 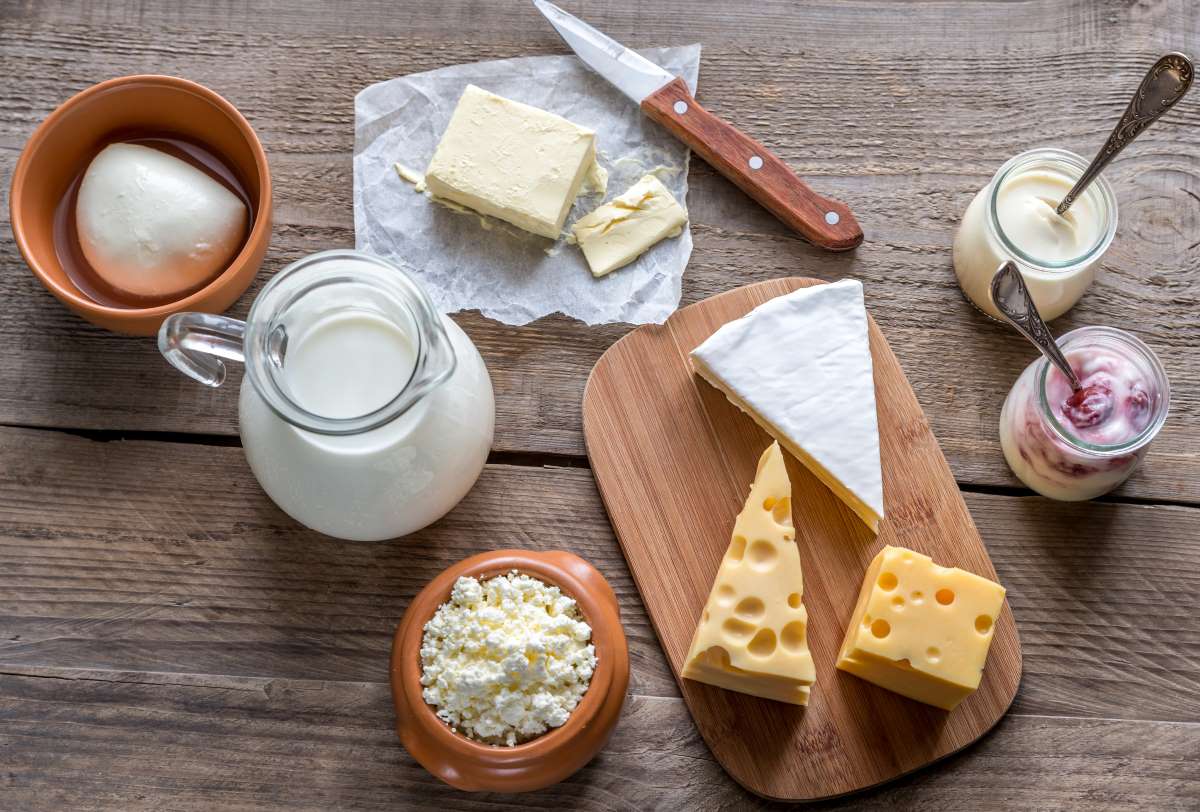 Paleo is a strictly no-dairy diet that can put adherents at risk of calcium deficiency.

However, this kind of macronutrient distribution is closer to what we might term a ‘moderate approach’. This in itself may pose problems if your goal is fat loss, as adopting neither a high-carb nor high-fat strategy may mean you don’t enjoy the benefits of either, such as improved performance or increased satiety[30],[31].

One of the other key problems with the palaeolithic diet is its presumed scientific and historical accuracy. The paleo theory is based on the belief that over humans’ 2.4 million years of existence, our biology has adapted to this ‘palaeolithic’ diet. As a result, eating as our ancestors may have done could prevent modern diseases such as coronary heart disease, hypertension, type 2 diabetes, obesity, among others[32].

However, it would be incorrect to assume that our hunter-gatherer ancestors all ate the same diet. We know, for instance, that ancient man ate a wide variety of different food types, depending on geographical location and seasonal changes[33],[34].

The paleo diet misses out on many of the key foods, such as grains, dairy and soy, which are widely consumed in longevity ‘Blue Zones’ in regions of Greece and Sardinia.

In addition, regardless of what early societies ate, there is little evidence that these diets significantly affected human digestive physiology during human evolution[35]. Most of the evidence indicates that even where there have been human dietary adaptations, such as the ability to tolerate lactose in adulthood, most of these mutations appear to have occurred within the past 12,000 years: well after the development of agricultural practices and livestock domestication[36].

Lastly, one of the primary difficulties with the premise behind the paleo diet is that it can somehow cure ‘diseases of affluence’, such as metabolic syndrome[37]. While the palaeolithic diet contains many health-promoting foods, if we look at the diets of recent and current societies that continue to live and thrive on hunter-gather principles and small-scale agriculture, it’s evident that they are nearly all free of such diseases. This appears to be true regardless of whether they eat primarily animal sources, wild plant foods or a single starchy carbohydrate supplemented with wild foods[38].

In addition, ‘blue zones’ is a term used to describe areas that demonstrate exceptional longevity, including Sardinia, Japan and Greece[39]. Yet all of these countries’ food cultures rely heavily on foods, such as grains, dairy and soy, that would be ‘banned’ according to the paleo approach. Therefore, it’s likely that paleo’s benefits do not lie in its specific make-up but simply several shared characteristics between the diets and lifestyles of traditional societies[40].

The paleo diet undoubtedly shares several key characteristics with nutritional approaches that have proven health benefits. However, it’s also important to underline that any form of highly restrictive diet has inherent downsides. In this instance, it’s more than possible to enjoy paleo’s benefits through a healthy lifestyle and behavioural change without the same degree of restriction. So if paleo works for you, great. But if you enjoy your oats and potatoes, don’t fall into the trap of believing it’s the only way to achieve the same health benefits.

Want to know whether the keto diet stands up to scientific scrutiny as the best diet for weight loss, health and longevity? Read our article here.

[1] Cordain, L., (2012). The paleo diet revised: Lose weight and get healthy by eating the foods you were designed to eat. John Wiley & Sons.

[14] McRorie, Jr, J.W. and McKeown, N.M., (2017). Understanding the physics of functional fibers in the gastrointestinal tract: an evidence-based approach to resolving enduring misconceptions about insoluble and soluble fiber. Journal of the Academy of Nutrition and Dietetics, 117 (2), pp.251-264.

[15] Jamka, M., et al. (2020). The Effect of the Paleolithic Diet vs. Healthy Diets on Glucose and Insulin Homeostasis: A systematic review and meta-analysis of randomized controlled trials. Journal Of Clinical Medicine, 9 (2), p.296.

[26] Reeves, A., (2017). A critique of the ‘paleo diet’: broader implications of a socio-cultural food practice. Contingent Horizons: The York University Student Journal of Anthropology, 3 (1), pp.1-6.