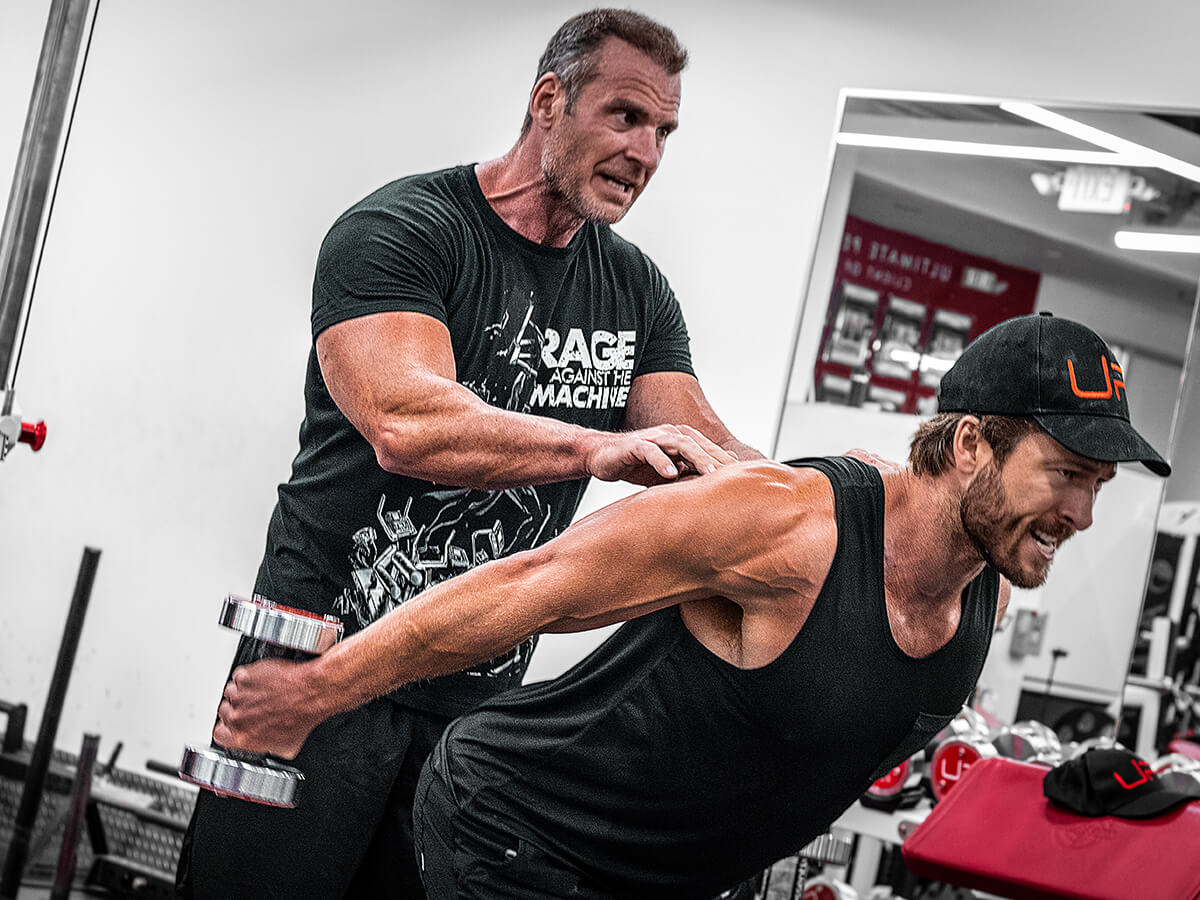 Glen Powell needed to be in the best shape of his life for the new Top Gun: Maverick film – so his diet and training needed to be on-point.

With just seven weeks to build a lean and muscular physique for Tom Cruise’s Top Gun sequel, he put his body transformation in the hands of Nick Mitchell and his Ultimate Performance team.

Nick designed a training program to give Glen the athletic look he wanted – but getting Glen’s diet right was critical in helping reshape his body over the seven weeks. 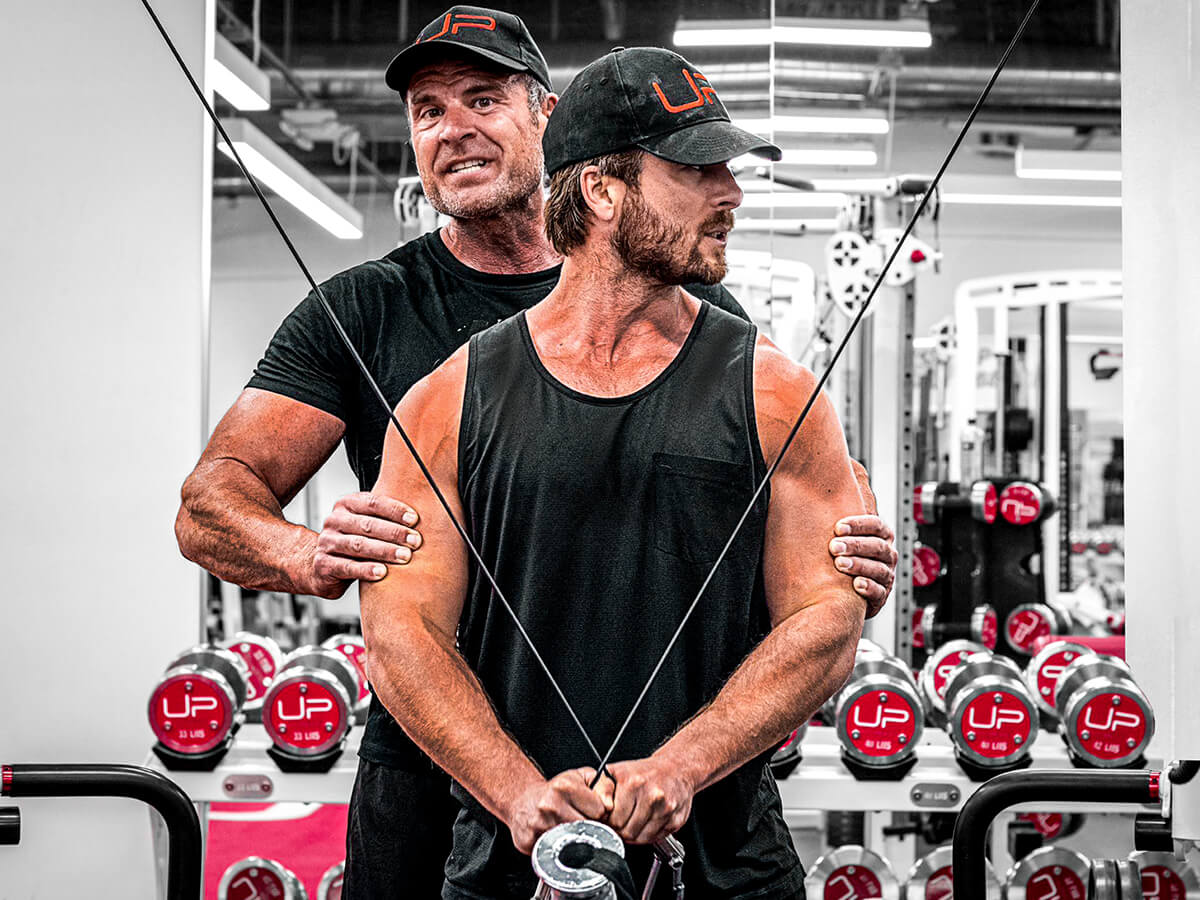 Like thousands of executives we work with, Glen didn’t have the time or headspace to think about a complex diet plan.

He didn’t have an army of chefs serving up every meal. He was filming, rehearsing, travelling from location to location, or learning to fly on his gruelling Top Gun schedule.

What Glen needed was a stripped-back and simple diet plan that would maximise the results of his 3 to 4 personal training sessions each week.

Nick created a tailored diet plan built on simple but powerful principles we use with every single client at U.P.

Here Nick shares the ‘secrets’ to Glen’s diet that work for anyone who wants to level-up their results:

THE PRINCIPLES OF GLEN’S TRANSFORMATION DIET

What nutrition principles did you get Glen to focus on?

Glen’s diet was kept very simple. He had a busy and hectic schedule, long days on set filming and often unpredictable changes to his daily routine. This meant that tracking every bit of his food was not the optimal approach for him. Instead, he was given a calorie and protein target with a focus on the core principle of ‘eating from the land.’

By this, we mean sticking to the types of food that you can kill, pick or pluck. The most important aspect of effective dieting, especially when you have a very finite and short amount of time, is finding a plan you can stick to and follow consistently. Glen was on 2800 calories, eating three or four times per day, with an emphasis on protein.

He had a protein target of 200g. However, his carbohydrates and fats were kept flexible so long as he stayed within his calorie target. He avoided any dairy products due to gut health issues. One day a week, his calories would be dropped to roughly 2,000 with a focus on animal protein sources, such as chicken breast, and aiming for less than 100g of carbohydrates. The rest of his calories were coming from good quality fat sources.

During his transformation, Glen only used a handful of supplements to support his progress and help to give him an edge. 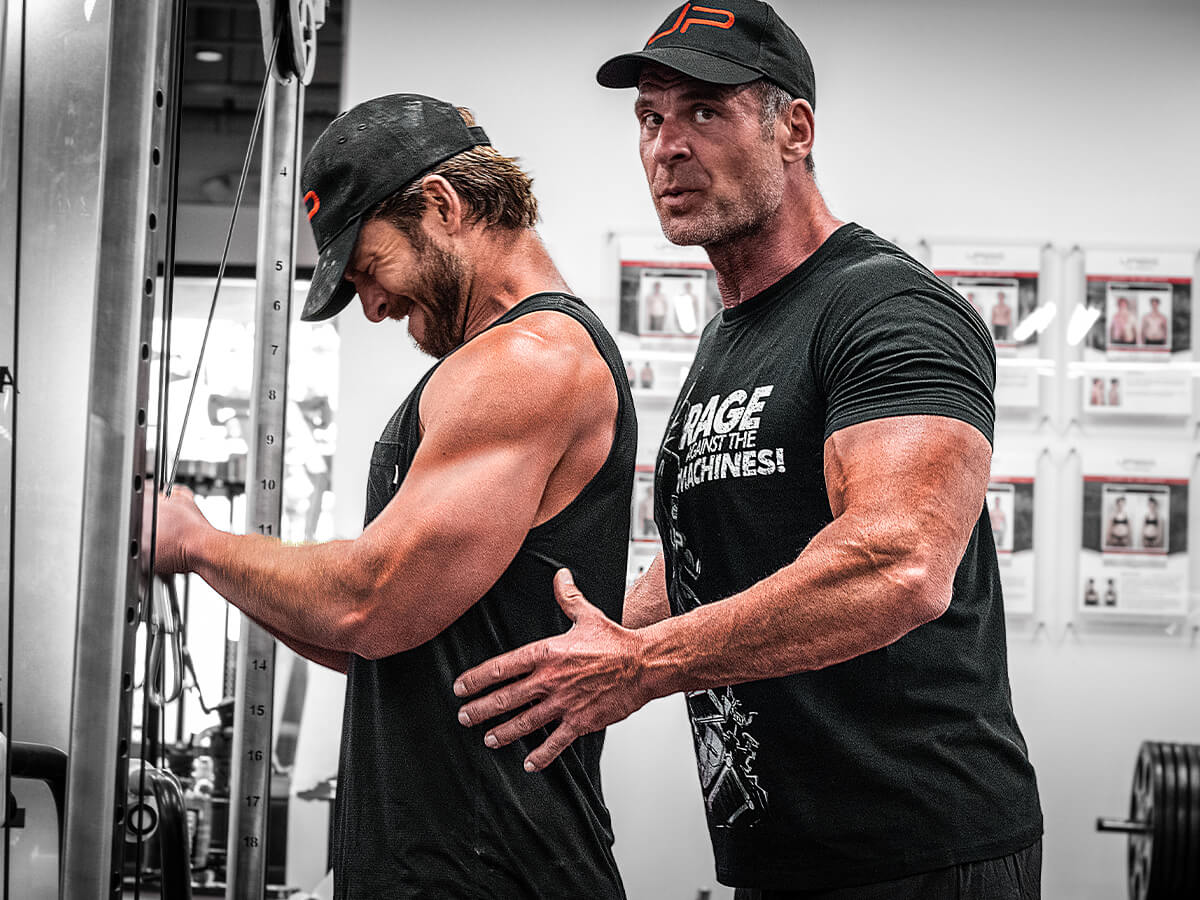 How did you manage Glen’s diet around filming?

Glen was too busy to micromanage his diet. With some clients, we would’ve said, “put your diet in the U.P. Transform app. I’m going to track your food and play around with the calories”.

With Glen, that was not going to happen. So it was more, “these are the principles. Let’s talk about your food that you’ve been eating for the last day or two.”

What did Glen’s diet look like day to day?

As I said, Glen was probably eating three or four times a day, maximum. The emphasis was on protein. It was always quality first. He would eat lean chicken, lean beef, wild fish, like cod and halibut, and yellowfin tuna and shrimp.

We would control calories more by manipulating carbohydrates than by manipulating fats. His fat sources were olive oil, fats from the protein sources, avocados, nuts, organic butter, and coconut oil. His carb sources were green vegetables, like broccoli and spinach, and basmati rice, oats and sweet potato.

We might decrease the calories by going, “okay, let’s take a blanket prescription.” An easy way to decrease calories is to go, “okay, no carbs for a day. Let’s see what happens then”. It’s fluid. It has to be fluid, and it’s a conversation. And then this goes back to the point I made about the training – it’s about trust. 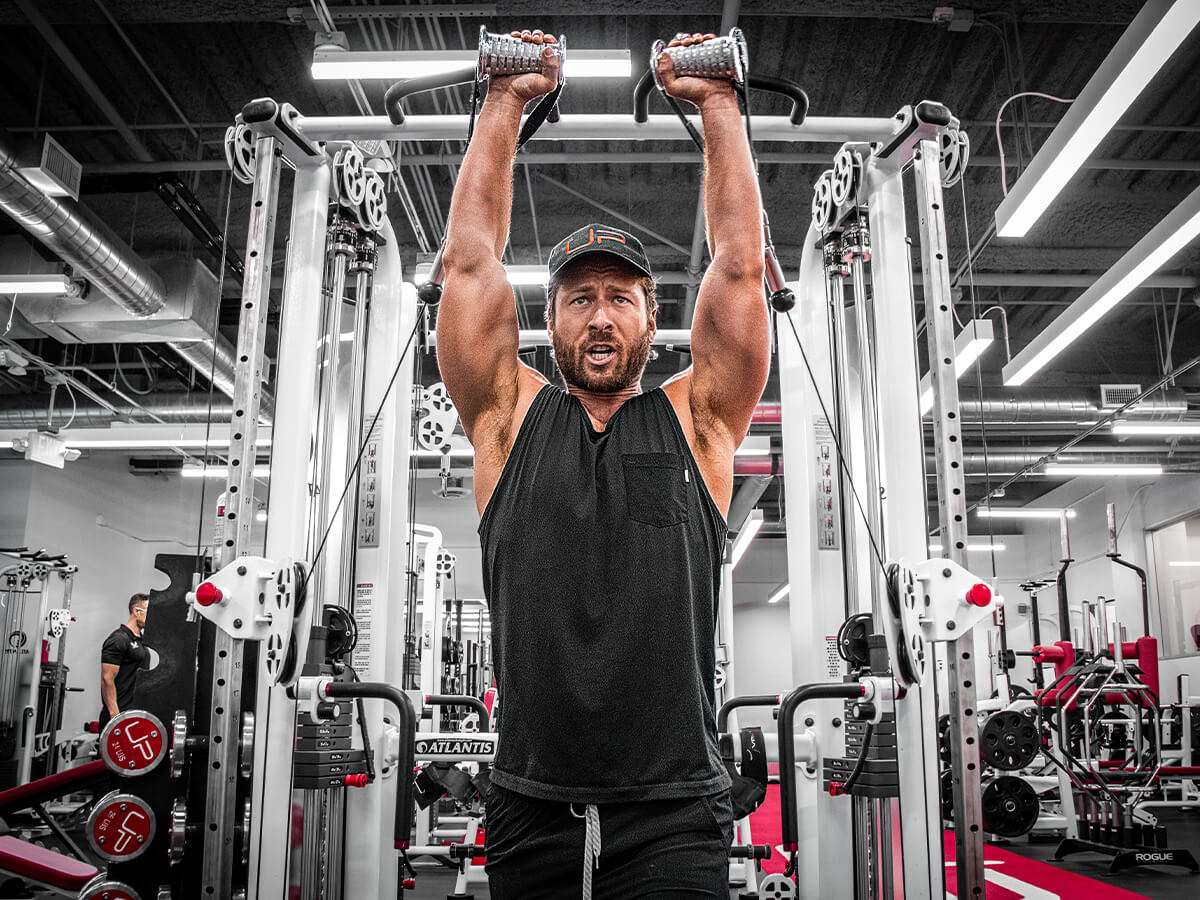 Learn how Glen trained during his Top Gun transformation with an example workouts included.

What progress metrics or data were you tracking during Glen’s program?

We would track Glen’s workouts and performance. I want to see the gym performance numbers improving each and every time. If I know that he’s not over-training, he’s not over-dieting. He’s not pushing himself too hard. That’s a key metric.

You’re always going to ask how he is sleeping. You’re going to look at body weight, but the truth of the matter is, who gives a damn about what he weighed? He could have weighed 50kg or 125kg. It’s how is he going to look on camera?

What are you looking like in those key ‘money shots’? How are they coming in? And for us, the primary emphasis was the money shots. How are you going to look in those specific postures and positions that we want to maximise on film? Again, what was unique about this versus working with a regular personal training client, a non-actor, is you’re going to be in Top Gun: Maverick.

You’re going to have your top off. You’re going to be doing certain poses – catching an American football, throwing the ball and celebrating the touchdown. And obviously, it worked because we’ve got him doing one of those shots on billboards, probably all over the world, which is a great buzz to see your work expressed in such a way. It’s very gratifying.

Did you use any supplements to support Glen’s body transformation goals?

We did use a small handful of supplements. Not a lot, because we didn’t want to complicate everything. We used Estro Support. Not necessarily to manage estrogen balance – we use this as a supplement for women to help manage estrogen balance – but more as an anti-inflammatory to help keep his physique looking as sharp and crisp as possible at the end.

We always did and will use the Amplify supplement, which is primarily leucine, as an intra-workout drink. This is something that I always use when I train myself. It’s a couple of scoops of Amplify at every workout. Then really, it’s just the post-workout shake of giving him 10, 15, 20 grams of glutamine, which is a transaminator, and creatine. He can’t have whey protein, so we would give him our vegan protein. We kept it simple.

You do everything you can to get an edge. So we wouldn’t do it if I didn’t think it would’ve helped give an edge. It’s also an opportunity where you can really control what your client is eating. So if you are only with them for an hour, three, four times a week, I’m going to give them 50 or 60 grams of high-quality protein, plus a few other things because it gives me a certain amount of control. 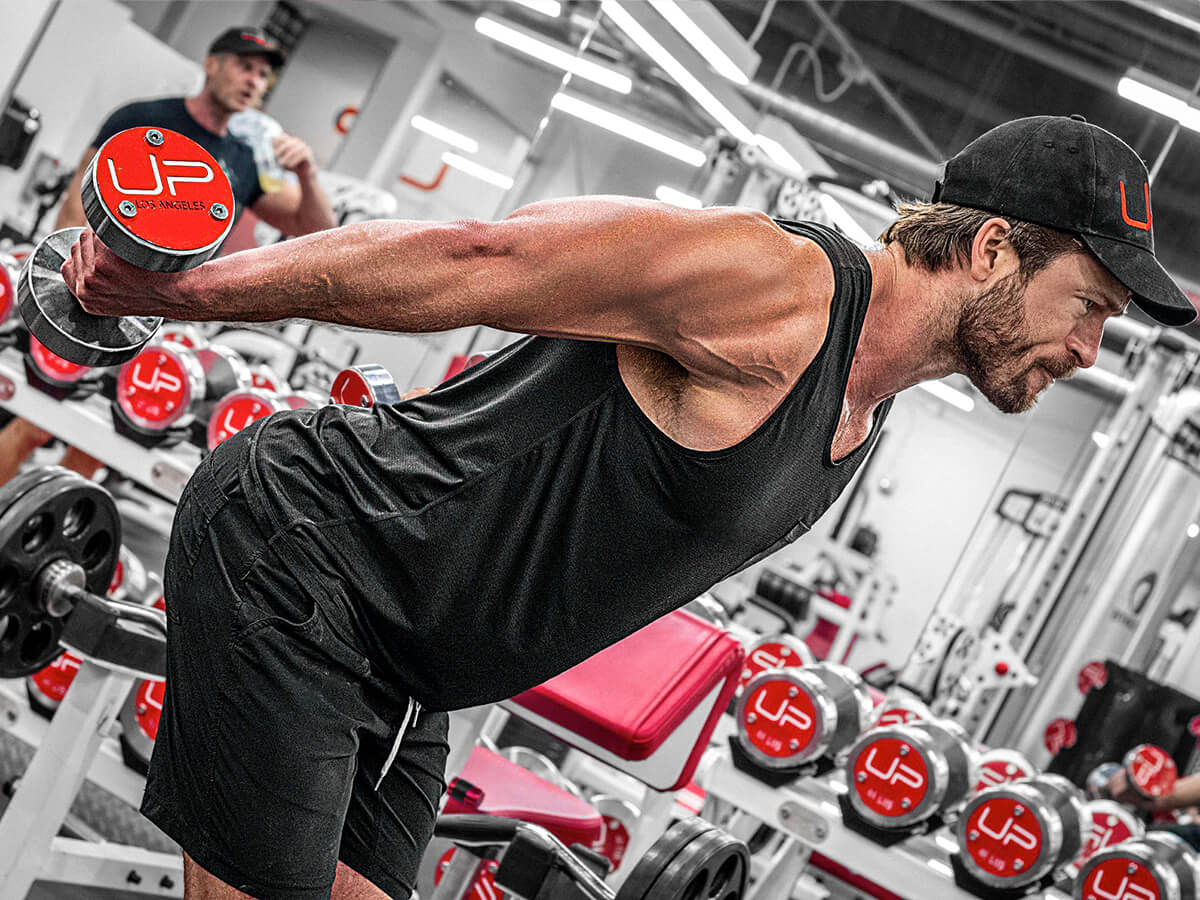 Glen’s diet was built on the philosophy of ‘Eating from the land’. He focused on eating nutrient-dense whole foods – high quality protein, plentiful green vegetables, and healthy sources of carbs and fat.

During his initial seven-week training phase he was eating to a plan with an estimated 2800. His macronutrient split was 200g protein, 300g carbs, 88g fat. 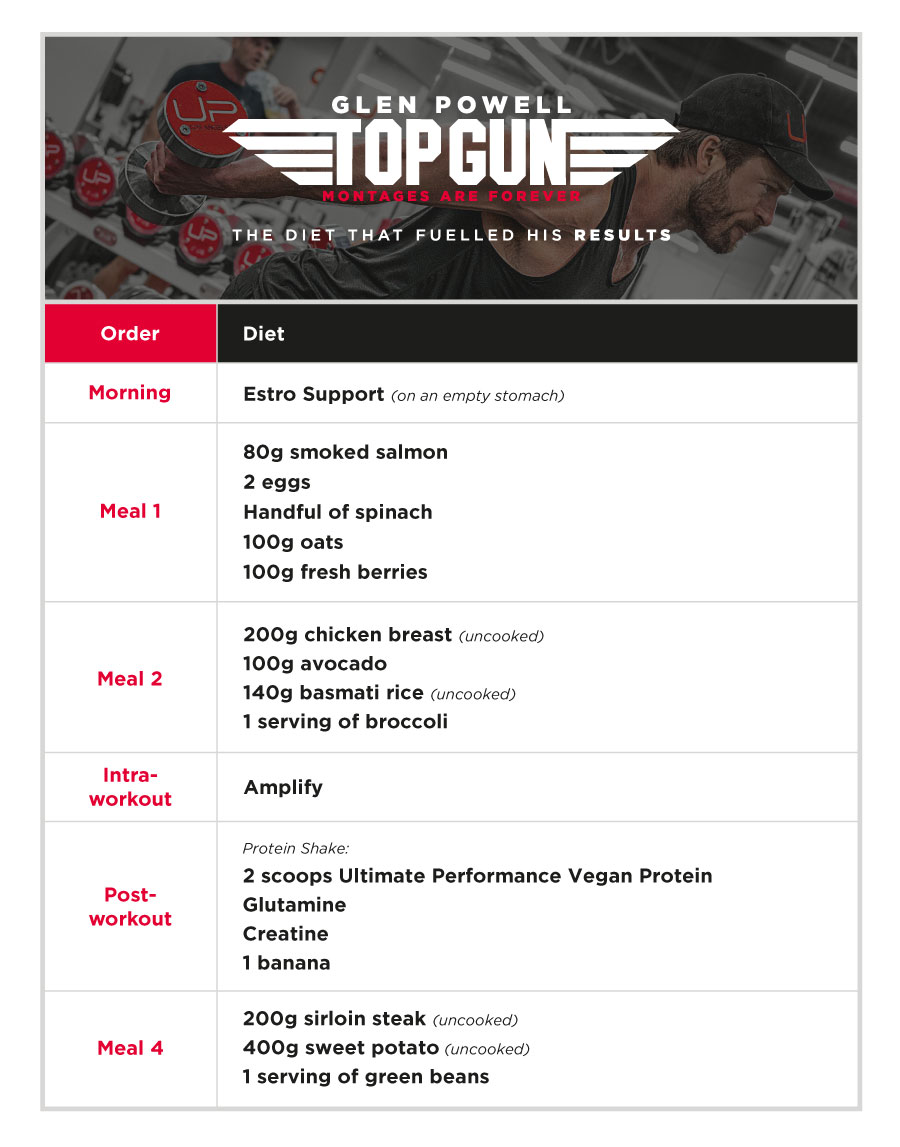 (Disclaimer: this is an example – food choices would change day to day)

IF YOU WANT A TAILORED DIET AND TRAINING PLAN THAT IS PROVEN TO DELIVER RESULTS LIKE GLEN AND OUR 25,000+ CLIENTS, PARTNER WITH US AT ULTIMATE PERFORMANCE. ENQUIRE TODAY.