This Is the Number One Diet Mistake Vegetarians Make

Vegetarian diets are becoming more and more popular with people wanting to ‘eat healthy’ and get leaner.

While there are many ways to define such a diet, for the purpose of this article we will refer to them as people who have cut out meat and fish, but still eat eggs and dairy.

However, there’s one big mistake that so many vegetarians are making when they switch to a predominantly plant-based diet.

While trying to make a healthier choice, vegetarians can often be over-reliant on ‘fake’, processed products and meat replacements. This mistake is particularly prevalent in vegetarians who are new to healthy eating, and want to make a conscious effort to improve their body composition. 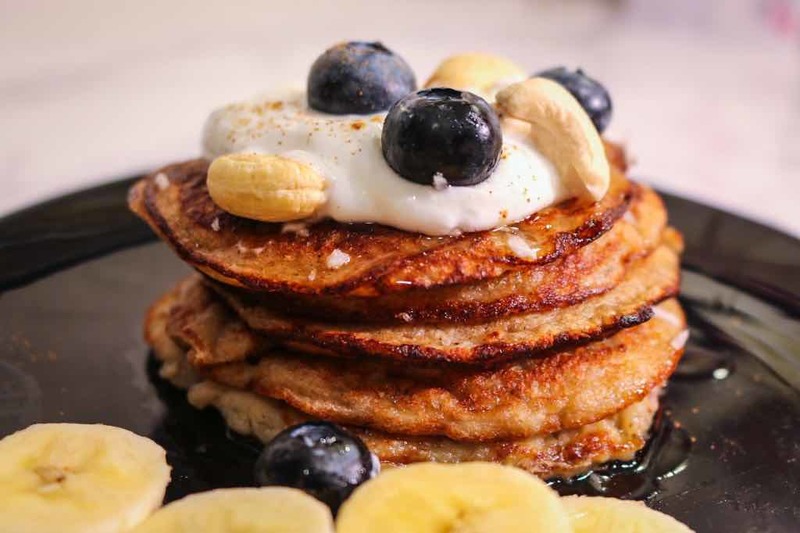 Given the majority of the nutrition information available is centred around eating lean meats and vegetables, many vegetarians try to emulate this approach by using meat replacements and various other fake products that have no place in a healthy diet.

Contrary to what the product advertising suggests, the reality is that these ‘Frankenfood’ options will only negatively impact hormonal health, digestion, performance and ultimately, body composition. If you want to follow a plant-based diet for improved body composition and health, your diet should be based on a large variety of vegetables, nuts, seeds and some fruits.

Depending on your tolerance for carbohydrates, beans, legumes, quinoa and root vegetables can also be added in varying amounts. For carbohydrate sources, it’s essential to emphasise high quality, wholesome grains, rather than the usual abundance of overly-processed food many vegetarians often consume.

The bad reputation for vegetarians being weak, skinny and fat is in a large part due to their reliance on processed ‘fake meats’ and carbohydrate sources.

Here’s a 10-week result with a vegetarian client who managed to gain 2kg of overall body weight, whilst getting into incredible shape! 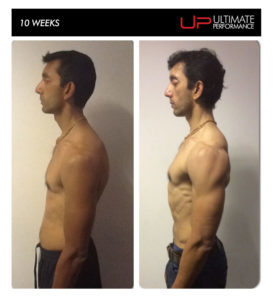 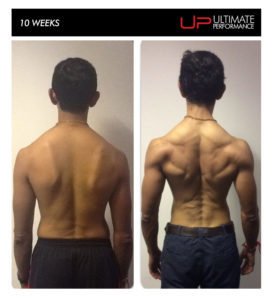 At Ultimate Performance, we’ve found the optimal protein intake for clients wanting to get lean is somewhere between 0.8g and 1.25g per pound of bodyweight, depending on gender (females typically require less) carbohydrate and calorie intake, and androgen production. This target may seem like a tall order, but looking at the protein content of the top performing foods available makes it a lot more attainable. 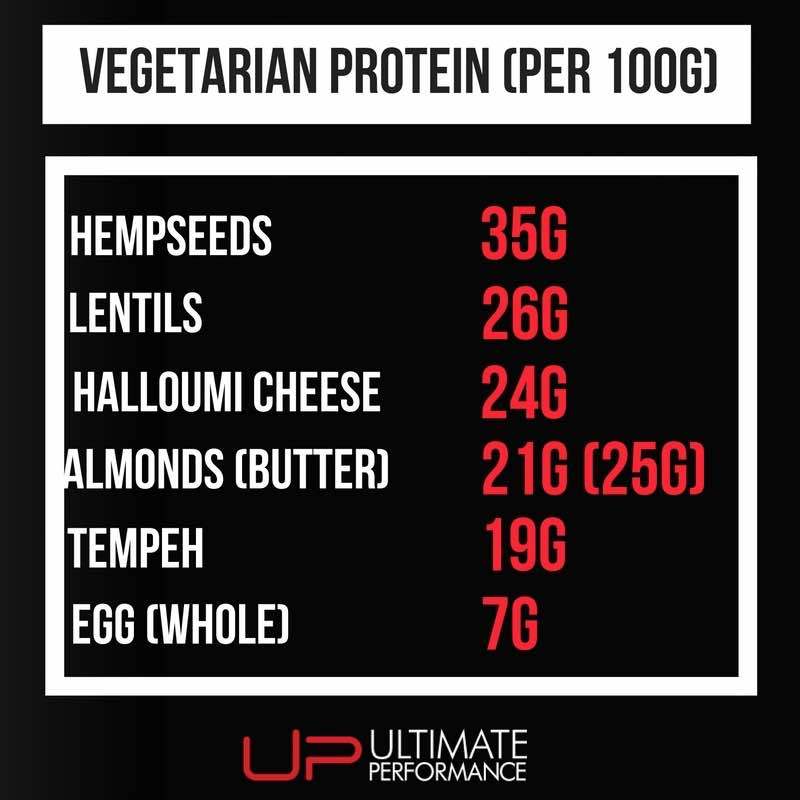 Therefore, whilst we can get 25g of protein from 100g of almond butter, eating the full 100g will undoubtedly send the overall calorie intake beyond the prescribed amount. Similarly, legumes present the same issue. When organising a plant-based diet, one of the difficulties presented is the ability to consume protein as a single macronutrient. For example, to get the protein from nuts, we must be aware that the fat content per 100g is at a higher ratio (typically 50-60%).

This time carbohydrates are the macronutrient we need to factor in, as they typically contain anywhere between 40-60g of carbohydrates per 100g. 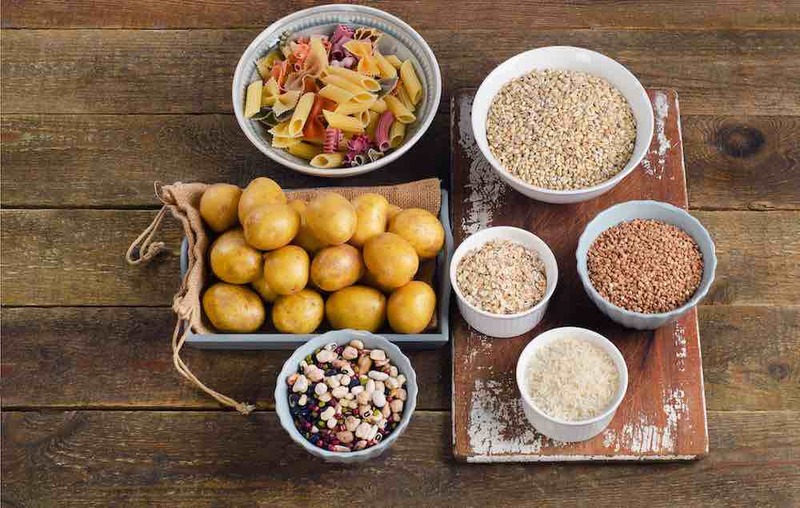 That’s why it’s critical vegetarians become educated about their food choices and learn to plan meals in advance.

For this population, learning to track food intake and manipulate macronutrients is essential for long-term success. Given the complexities of vegetarian foods, and the fact there are very few foods (if any) that will provide, for example, 25g protein with minimal fat or carbs with it, you have to learn about the foods you’re consuming, or you could find yourself very easily overeating.

Another pitfall of a vegetarian diet based around processed foods is that it highlights the nutritional deficiencies already present, but to a greater extent. 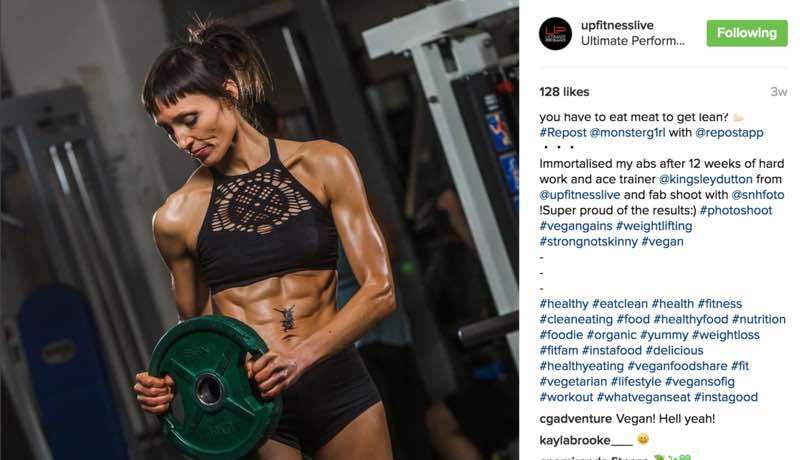 Meat-free client Emma Watts transformed her physique in 12 weeks at UP on a vegan diet.

Whilst we could write about them all, the most important supplement to consider for overall health and well-being is vitamin B12. The plant-derived form of B12 is not usable by humans, making deficiencies prevalent amongst vegetarians (Pawlak, Lester, & Babatunde, 2014). B12 is involved in the metabolism of every cell in the body.

A deficiency in this vitamin has been associated with neurological disorders, cognitive malfunctioning, vascular issues, impaired immunity and fatigue (the most common day-to-day issue we see in vegetarians).

Of course, deficiencies generally build up over years, but some of the more serious effects, such as neurological disorders, can prove irreversible. To combat this, a high-quality vitamin B complex is advised to cover your bases. For more specific cases, higher doses of B12 (up to 1000mcg) are recommended, although it’s best to get tested with your doctor first.

To get the best out of a vegetarian diet, it really does require some thinking and careful planning.

It’s a tough diet to ‘wing’ on the go, like omnivores may be able to do. One of the reasons why fake meat replacements and processed foods are such a popular option with vegetarians is their ease of preparation, and availability when out of the house.

A real vegetarian diet should be based around quality food, optimal protein intake, and the right number of calories that your body needs to either lose body fat or build muscle.

Whilst there are many more things to it, one of the most important skills a vegetarian should learn is how to track their macronutrients, calories and become educated on the nutritional content each food provides.

This will allow them to get out of the rigidity and boredom commonly associated with blindly following vegetarian meal plans (which can be useful for ideas and providing an initial structure), and begin to enjoy and thrive in their plant-based lifestyle.

Cut out the guesswork and get expert advice on the exact nutrition and training you need to get your ideal physique with UP’s Personal Training plan.

But don’t worry if you don’t live near a UP centre, you can still get in ultimate shape with one of UP’s Online Personal Training plans.